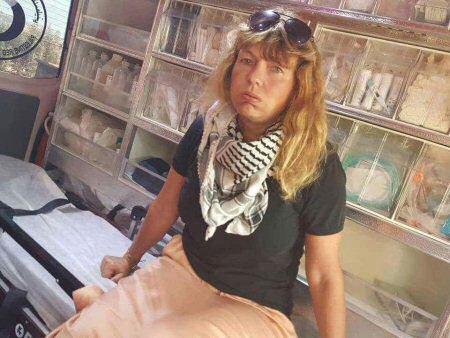 A Norwegian activist, Saturday, was shot and injured with a rubber-coated steel bullet as Israeli forces quelled the weekly and peaceful anti-settlement demonstration in the village of Kufr Qaddoum, to the east of Qalqilia, said WAFA correspondence.

Confrontations reportedly broke out between demonstrators who also rallied to protest Israel’s closure of the main road that connects the village of Kufr Qaddoum with the city of Nablus, since 2003. Subsequently, Israeli forces cracked down on the peaceful rally, using excessive force against demonstrators.

A forty five-year-old Norwegian activist was struck in the abdomen area with a rubber-coated steel bullet. Her medical status remains unknown until the moment.

No other injuries or arrests were reported.

“Before 2003, the residents of Kufr Qaddoum would use a shorter road to the east in order to come and go to nearby cities and villages. However, as the settlements expanded so that they overwhelmed the road, it became closed for Palestinian use, said Addameer Human rights Association.

The only alternative road is roughly six times longer than the previous route, disrupting the villagers’ ability to attend university, their jobs, and other vital aspects of their economic and social well being, noted Addameer.

“Three Palestinian deaths relating to the road’s closure occurred between 2004 and 2005,” it said. Although Kufr Qaddum’s Popular Resistance Committee took their case to the Israeli High Court in 2003, the legal status of the road remains unchanged, stressed Addameer.

After all legal appeals failed, villagers decided to organize weekly demonstrations in July 2011, a step that was met with violent suppression by Israeli forces.