Not A Merry Christmas For Christian Detainees In Israeli Prisons 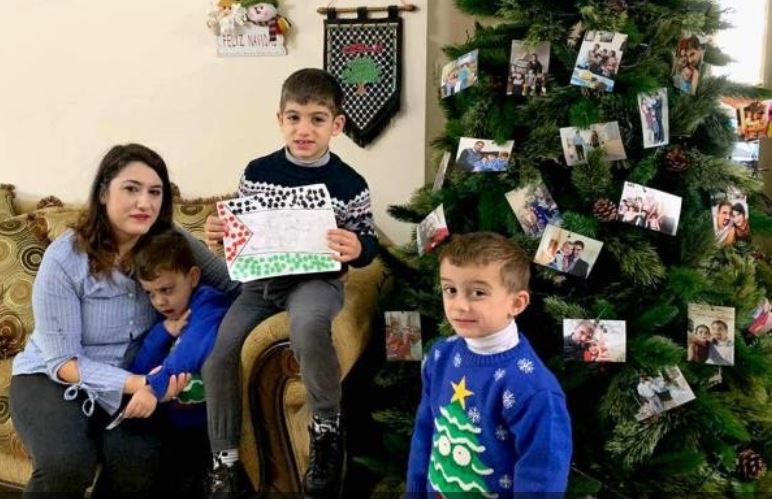 At the house of Palestinian political prisoner, Samer al-Arabid, in the central West Bank city of Ramallah, you can find no Christmas tree, no celebration and no joy to the world. After all, he is facing a serious health condition after being severely and continuously tortured by Israel.

Samer comes from a Palestinian Christian family, and since he was abducted by Israeli soldiers on September 26th, 2019, he was continuously tortured and abused by the Israeli interrogators, and two days later, he was rushed to Hadassah medical center in a very serious health condition.

He was struck and beaten all over his body, and was cautiously tortured, and is now also suffering from kidney failure, fractures in his rubs, and other complications, due to repeated strikes by his torturers.

His wife, Noura, says that she had to take her family, along with Samer’s mother, and move to another house due to ongoing invasions and violent searches by the Israeli forces, escalating even after he was abducted.

“Just like Jesus, they crucified him in al-Maskobiyya” Noura said. Al-Maskobiyya is a detention and interrogation facility in occupied Jerusalem.

She was only able to see him shortly when he was brought to court but was not allowed to visit with him.

“I looked at his face, I could barely recognize my own son,” she said, “They beat him up; they tortured him, they bruised his body…”

The same thing could be told about another detainee, Obai ‘Aboudi, 31, a Palestinian Christian expert in Economics and Palestinian Development, who was abducted by the Israeli forces on November 13th, 2019, after they invaded and rampaged his home in Kafr Aqab area, north of occupied Jerusalem.

Aboudi was continuously interrogated and tortured, before Israel decided to hold him captive under the arbitrary Administrative Detention orders, without charges.

In occupied Jerusalem sits the family of two other Christian detainees, Na’el and his brother Nasser Halabi, living in fear and worrying about the fate of their two sons, instead of celebrating a Merry Christmas together.

Ra’ed Halabi, the brother of the detainees Na’el, 34, and Nasser, 31, said that this is the second time his brothers have been held by Israeli without charges, under the so-called Administrative Detention orders, under which Israel does not have to file charges, under the allegation of having a “secret file” — a file neither the detainees nor their lawyers have access to.

The two siblings, over the course of their previous arrests, have spent more than six years in prison each, and their cousin, Khaled Halabi, has been in prison for many years now.

Christmas time in their homes is not a festive time, as the families continue to suffer and long for their imprisoned loved ones, ignored by the world, especially the so-called Christians who support Israel’s crimes and atrocities, and ignore the very existence of the Palestinian Christians, including those who could be the decedents of the Shepherds who followed the star to Bethlehem.

Raed says that since the year 2004, Christmases have not been festive for his family, but this year, Christmas time was the most difficult after hearing about the extreme torture Na’el was subjected to in al-Maskobiyya, and being unable to see him or know more about his condition, especially since Israel has been preventing his own lawyer from visiting with him for more than 45 days and counting.

For many years now, the Halabi family has been denied visits with their detained loved ones and are not even allowed to hear their voices over the phone, despite various appeals.

It is worth mentioning that al-Arabid and Aboudi were among six Palestinian Christians who were abducted along with fifty other Palestinians, mainly members of the Popular front for the Liberation of Palestine, after Israel claimed they are somehow “involved” in the explosion which led to the death of an Israeli settler, and the injury of two members of her family in August.

Israel claimed they all were “connected” or “involved” in the bombing without providing evidence to support the claims.

‘Aboudi is the head of Bisan Center for Research and Development in Ramallah, and many scientists and intellectuals around the world, including the American linguist, philosopher, cognitive scientist, and historian Noam Chomsky, in addition to Prof. George Smith, who won the Nobel prize, have called for his release.

‘Aboudi was supposed to be traveling to the United States, to participate in a conference in Massachusetts this coming January, where he was planning to talk about the difficulties the Palestinian workers face under Israeli occupation.

His wife, Hind Aboudi, decided to do what their children, Khaled, 5, and the twins Bassel and Ghassan, 3, asked for, which was to decorate the Christmas tree with Palestinian flags, and said that “our Christmas, our holidays, will only be festive and Merry when all detainees are released from the prisons of the Israeli occupation.”

She tries to maintain some atmosphere of joy for her children at home, especially during Christmas, and even “Santa Claus” came to her house and gave presents to the Children – they were joyous at least to think that Santa and the gifts were sent by their imprisoned father.

The situation isn’t different in the home of Palestinian detainee, George Abu Ghazala, in Ramallah, however, his family decided to light the Christmas tree, and to pray for his release, and the freedom of all detainees in Israeli prisons.

George was abducted by the Israeli army more than a month ago, and is still under interrogation in al-Maskobiyya, and is not facing any charges, while the army is claiming it intends to file charges against him in Ofar military court.

What makes things even worse is how many fundamentalists, including Christian groups, support Israel’s ethnic cleansing of the Palestinian people, its atrocities, crimes, and illegal policies, ignore the very existence of Palestinian Christians, even though they are indigenous to the very same land where Jesus Christ was born.

They are “the salt of the earth,” the native Christians, the indigenous and the first to follow Christ, yet, they are the forgotten and the ignored by the “Christian” brothers and sisters, who deny their very existence or just dismiss them as untrue Christians.

Christians in Palestine are a very small minority, and this article, highlighting their suffering under the brutal and illegal Israeli occupation of Palestine, is not meant to ignore the suffering of all Palestinians, regardless of their faith, or the suffering of all human beings, but to highlight the forgotten and largely ignored Palestinian Christians, especially while millions of Christians celebrate Christmas and sing to Bethlehem, without even knowing or wanting to know that this Palestinian city that holds the Church of the Nativity, where Jesus Christ was born, is surrounded by the illegal Apartheid Wall which was built by Israel, and is surrounded by illegal colonies.

If Joseph and the Virgin Mary are to walk to Bethlehem, they will be stopped by the illegal wall of segregation and apartheid.

— This piece was written in Arabic by Mirvat Sadeq, in Ramallah, and was published by al-Hadaf News.

It was translated and editorialized into English by Saed Bannoura, a Palestinian Christian journalist who helped create the International Middle East Media Center (IMEMC.org) in Bethlehem in the occupied West Bank, and currently works as the center’s Editor-in-Chief.

Despite having been shot and paralyzed by Israeli special forces in 1991, Saed Bannoura has spent his adult life working for peace and justice through nonviolence.

Saed Bannoura is also an Editor and Researcher working for If Americans Knew, writing biographies of Palestinians and Israelis killed in the course of the ongoing conflict on the website (IsraelPalestineTimeline).