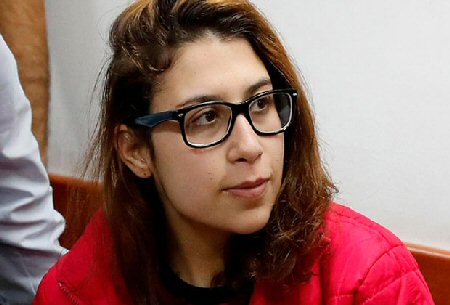 On Thursday evening, an Israeli court ordered the release of Nour Tamimi on a 5000 Israeli Shekels bail, after holding her captive for two weeks.

The court denied an appeal by the prosecution, demanding keeping Nour held without bail, and ordered her immediate release.

An Israeli court indicted, on Sunday, 21-year-old Palestinian girl Nour Tamimi, who was seen slapping a heavily armed Israeli soldier, along with her cousin, Ahed Tamimi, two weeks ago.

The court charged Tamimi with aggravated assault of an Israeli soldier and obstructing a soldier from carrying out his duty.

A short video showed the young Tamimi girls slapping an Israeli soldier in Nabi Saleh, after shooting their cousin in the head.

Both girls were abducted by Israeli forces from their houses at night, according to Days of Palestine, just hours after slapping the Israeli soldier.

A prominent Israeli journalist called for raping Ahed Tamimi, while Israeli Defense Minister Avigdor Lieberman called for her to spend all of her life in prison.

His party was recently the focus of a corruption probe within the Israeli political spectrum. More recently, Lieberman’s life was threatened with an assassination attempt.