OCHA: “33 Structures Demolished In The Past Three Days In Multiple Incidents” 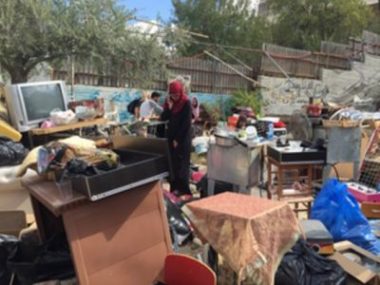 Press Release – OCHA: Between 26 and 28 September, the Israeli authorities demolished 33 residential and livelihood-related structures in multiple locales across Area C and East Jerusalem, on grounds of lack of building permits. As a result, 35 people, a third of them children, have been displaced, and more than 100 have been otherwise affected.

The incidents took place in nine Palestinian communities, including Khirbet Tell al Himma in the northern Jordan Valley (Tubas); Huwwara and Beit Dajan in the Nablus governorate; Khan al Ahmar (Makab as Samn) and Abu Nuwwar in the Jerusalem governorate; Jurat al Kheil and Susiya in Hebron; and At Tur and Beit Safafa in East Jerusalem.

Five of these are Bedouin or herding communities, which are among the most vulnerable in the West Bank in terms of humanitarian needs.

These incidents bring the total number of structures destroyed or confiscated by the Israeli authorities in the West Bank since the beginning of 2016 to 878. This represents a 60 per cent increase compared to the figure for the whole of 2015 and is the largest number of structures targeted in any full year since 2008, when OCHA began systematically documenting this phenomenon.

Due to discriminatory and unlawful planning processes, it is almost impossible for Palestinians to obtain building permits in the vast majority of Area C and East Jerusalem, the systematic destruction of property in this context, along with other factors, contributes to the generation of a coercive environment pressuring residents to leave.