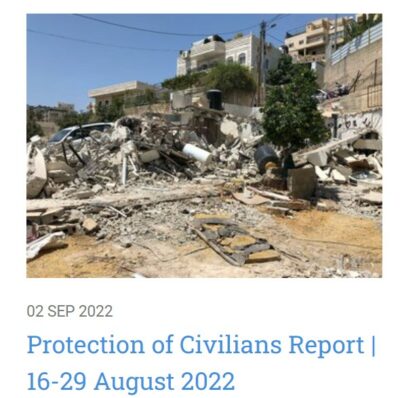 Report By the United Nations Office for the Coordination of Humanitarian Affairs (OCHA):

Latest Development (outside the reporting period)

On 19 August, Israeli forces conducted a military operation in Tubas city, where an exchange of fire with armed Palestinians was reported. Israeli forces shot live ammunition and tear gas canisters at residents who threw stones.

A Palestinian man passing by was shot in the head and killed. According to initial investigations by human rights organizations, he was killed by Israeli forces; the Israeli military said that it would investigate the incident. One other Palestinian was arrested in the same operation.

The Jerusalem-governorate accounted for the highest portion of operations (37) and arrests (48). During eight of these operations, Israeli forces fired live ammunition at Palestinians who threw stones, resulting in 39 Palestinian injuries, including 13 by live ammunition.

On 18 August, Israeli settlers accompanied by Israeli forces accessed the site to pray. While doing so, Israeli forces fired sound bombs and Palestinians threw stones at them.

According to Israeli media reports citing Israeli military sources, Palestinian youth shot at the soldiers. An initial investigation by human rights organizations indicated that the youth were not involved in shooting.

So far in 2022, Israeli forces have killed three Palestinians, including one child, and have injured more than 400 Palestinians, while they were accompanying Israeli settlers to this site.

103 of the injuries were recorded near Beita and Beit Dajan (both in Nablus), and Kafr Qaddum (Qalqilya) in anti-settlement protests. Another 39 Palestinians were injured during search-and-arrest operations (see above).

31 additional injuries were reported following the raid on the offices of civil society organizations (see below) as Israeli forces fired rubber-coated metal bullets and tear gas canisters at Palestinians who threw stones in protest at the Israeli military raid. In Nablus city, 75 people were injured following the entry of Israeli settlers to Joseph’s Tomb, accompanied by Israeli forces (see above).

Of the 248 Palestinians injured, about 7 per cent (22 injuries) were by live ammunition.

The Israeli authorities demolished, confiscated, or forced people to demolish 55 Palestinian-owned structures in East Jerusalem and Area C of the West Bank, citing the lack of Israeli-issued building permits; ten of the structures were funded by donors.

As a result, 61 people, including 31 children, were displaced, and the livelihoods of about 200 others were affected. Some 47 of the structures were in Area C, including seven in Al Jiftlik Ash Shuneh, in a designated ‘firing zone’ for Israeli military training, and where Palestinian communities are at risk of forcible transfer. Eight other structures were demolished in East Jerusalem, including five destroyed by their owners to avoid paying fines imposed by Israeli authorities when they conduct the demolitions.

These closures are believed to be linked to a Palestinian shooting at Israeli-plated vehicles on Road 60, which did not cause any injury. On 28 August, Israeli forces at Jinba checkpoint detained for about four hours nine school staff who were on their way to Jinba school ahead of the opening of the academic year.

Their vehicle was confiscated, and the driver was taken to a nearby military base for questioning. On the same day the teachers of Al Fakhiet school who were travelling into the area from Yatta, were stopped by Israeli forces at a flying checkpoint that was erected near the entrance of Khirbet al Fakheit. The teachers were forced to return back to Yatta. Fixed and flying checkpoints in the area have disrupted the access of teachers and students to school, in some cases forcing them to walk long distances to avoid the checkpoints.