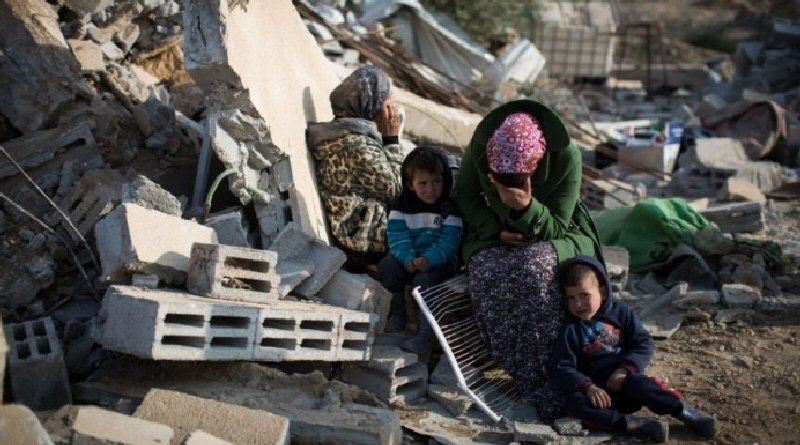 In December, the Israeli authorities demolished, forced people to demolish, or seized 67 Palestinian-owned structures across the West Bank, including East Jerusalem, resulting in the displacement of 50 people, including 30 children, and otherwise affecting the livelihoods or access to services of over 400 others.

All structures were located in Area C or East Jerusalem and were targeted due to a lack of building permits, which are nearly impossible for Palestinians to obtain. Seven of the structures located in three Area C communities had been provided as humanitarian aid, for a total cost of over 14,000 euros.

In one of the largest incidents, which took place in the Bedouin community of Ras ‘Ein al ‘Auja (Jericho), the Israeli authorities seized without prior notice seven structures, including three homes under construction and four livelihood-related structures, affecting 45 people. An additional five structures were targeted in three Bedouin communities in the Jerusalem governorate, located in or around an area planned for a large settlement project (the “E1” plan).

The plan, currently in its final approval stage, entails the construction of 3,500 housing units, placing 18 Bedouin communities at heightened risk of forcible transfer. Additionally, in the northern Jordan Valley (Hammamat al Maleh), a donor-funded kindergarten received a demolition order, although it serves a number of Bedouin communities.

Also in Area C, next to Suba village (Hebron), the Israeli authorities bulldozed some 30 dunams of agricultural land, on grounds that the area had been declared ‘state land’. As a result, agricultural terraces and surrounding fences (counted here as one structure) were destroyed, and some 930 olive, grape, almond and cactus trees were uprooted, undermining the livelihoods of eight families.

As part of a petition against mass demolitions in the Massafer Yatta area of southern Hebron, on 24 December, the Israeli High Court of Justice issued an interim injunction temporarily preventing the demolition of various structures, including homes, a school, a clinic and livelihood-related structures. This area had been declared closed for Israeli military training (‘Firing Zone 918’) placing about 1,400 Palestinians residing there at risk of eviction. These residents also face constant demolitions, access restrictions and settler violence.

Commitments made by the Israeli authorities to halt the demolition of inhabited homes during the COVID-19 crisis have been largely disregarded. Along with the repeated targeting of water and sanitation facilities, these practices have undermined the ability of already vulnerable families to adequately cope with the pandemic.

One of the major trends observed in 2020 was the increased use of military orders and other legislation, preventing or limiting people’s ability to legally challenge the targeting of their homes and sources of livelihood in Israeli courts.

In East Jerusalem, there was a major increase in the proportion of structures demolished by their owners, following the issuance of demolition orders, which reached 47% in 2020, up from an average of 23% in the previous four years. This is attributed to new Israeli legislation, which limited the authority of Israeli courts to intervene and enabled the ability of the Jerusalem Municipality to exert pressure on affected families to demolish their properties by themselves.