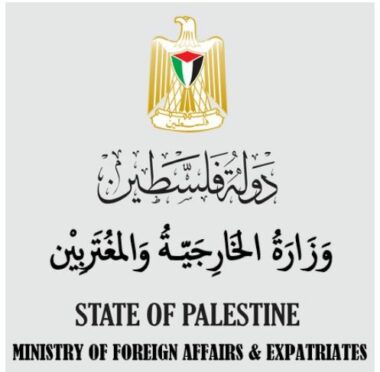 RAMALLAH, Tuesday, January 19, 2021 (WAFA) – The Ministry of Foreign Affairs and Expatriates today pledged to legally pursue the US ambassador to Israel, David Friedman after he recognized the settlement project called City of David in the occupied city of Jerusalem.

The Ministry said in a statement that all of East Jerusalem is a Palestinian territory occupied since 1967, and “it is the eternal capital of the State of Palestine despite Friedman and his outgoing administration, which has deviated from every legal, diplomatic or ethical norm.”

It considered that “Friedman’s bigoted statements are a flagrant violation of international legitimacy and its resolutions, and international law and diplomatic traditions.”

The Ministry affirmed that it will take responsibility to follow up this matter with legal experts and the concerned authorities to discuss the possibility of holding Friedman accountable before international and specialized courts.

The statement condemned Friedman’s recognition of the City of David settlement project, which came two days before the end of his duties as US ambassador to Israel, and considered it “illegal, invalid and reflects Friedman’s intentions and his dark ideology he tries to attach not only to his country, but to the American constitution and principles, and to employ them for the benefit of the Israeli narrative in Jerusalem.”

Friedman said in a statement that the US embassy recognizes the “City of David as a testament to America’s Judeo-Christian heritage and founding principles.”