OCHA Report On Israeli Violations – May 17-23 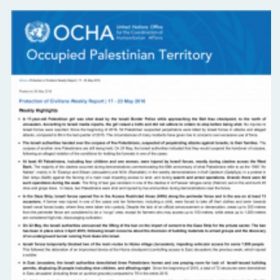 A 17-year-old Palestinian girl was shot dead by the Israeli Border Police while approaching the Beit Iksa checkpoint, to the north of Jerusalem. According to Israeli media reports, the girl raised a knife and did not adhere to orders to stop before being shot.

No injuries to Israeli forces were reported. Since the beginning of 2016, 52 Palestinian suspected perpetrators were killed by Israeli forces in attacks and alleged attacks, compared to 89 in the last quarter of 2015. The circumstances of many incidents have given rise to concerns over excessive use of force.

The Israeli authorities handed over the corpses of five Palestinians, suspected of perpetrating attacks against Israelis to their families. The corpses of another nine Palestinians are still being held. On 24 May, the Israeli authorities indicated that they would suspend the handover of corpses, following an alleged violation of the conditions for holding the funerals in one of the cases.

At least 49 Palestinians, including four children and one woman, were injured by Israeli forces, mostly during clashes across the West Bank.

The majority of the clashes occurred during demonstrations commemorating the 68th anniversary of what Palestinians refer to as the 1948 “An Nakba”, mainly in Al ‘Eizariya and Silwan (Jerusalem) and Ni’lin (Ramallah);

In the weekly demonstrations in Kafr Qaddum (Qalqiliya); in a protest in Deir Isitya (Salfit) against the fencing of a main road impeding access to land; and during search and arrest operations. Overall, there were 82 such operations during the week.

The firing of tear gas canisters in one of the clashes in Al Fawwar refugee camp (Hebron) set on fire and burnt 45 olive and grape trees.  In Gaza, two Palestinians were shot and injured by live ammunition during demonstrations near the fence.

In the Gaza Strip, Israeli forces opened fire in the Access Restricted Areas (ARA) along the perimeter fence and in the sea on at least 13 occasions. A farmer was injured in one of the cases and ten fishermen, including a child, were forced to take off their clothes and swim towards Israeli naval forces boats, where they were taken into custody.

Despite the lack of an official announcement or demarcation, areas up to 300 metres from the perimeter fence are considered to be a “no-go” area, except for farmers who may access up to 100 metres, while areas up to 1,000 meters are considered high-risk, discouraging cultivation.

On 22 May, the Israeli authorities announced the lifting of the ban on the import of cement to the Gaza Strip for the private sector. The ban has been in place since 3 April 2016, following Israeli concerns about the diversion of building materials to armed groups and the discovery of an underground tunnel running from Gaza into Israel.

Israeli forces temporarily blocked two of the main routes to Hizma village (Jerusalem), impeding vehicular access for some 7,000 people.  This followed the detonation of an improvised device at the Hizma checkpoint (controlling access to East Jerusalem) the previous week, which injured a soldier.

In East Jerusalem, the Israeli authorities demolished three Palestinians homes and one praying room for lack of  Israeli-issued building permits, displacing 26 people including nine children, and affecting eight  Since the beginning of 2016, a total of 72 structures were demolished in East Jerusalem (including three on punitive grounds) compared to 79 in the entire 2015.

On 18 May, an Israeli court ruled in favour of a settler organization claiming ownership over three apartments and two shops in the Sheikh Jarrah area of East Jerusalem, and ordered their evacuation by 10 June 2016. Four families are at imminent risk of displacement.

The establishment of Israeli settlements in the heart of Palestinian neighbourhoods in East Jerusalem has resulted in increased tensions and undermined the living conditions of Palestinian residents.

An Israeli bus travelling near Tuqu’ village (Bethlehem) and the Jerusalem light train sustained damage as a result of gunfire and bottle-throwing, respectively, by suspected Palestinians, according to Israeli media reports.

The Egyptian-controlled Rafah Crossing was closed during the reporting period. The crossing last opened on 11 and 12 May, following 85 consecutive days of closure. At least 30,000 people, including around 9,500 medical cases, and 2,700 students, are registered and waiting to cross according to the Palestinian authorities. Since the beginning of 2016, Egyptian Authorities have opened Rafah Crossing on only five out of 144 calendar days.

UN Office for the Coordination of Humanitarian Affairs: