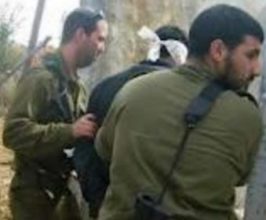 Palestinian medical sources have reported, Friday, that a child was injured by Israeli army fire near Bethlehem’s northern entrance. A young from the al-Khader town, south of the city, was kidnapped in Jerusalem.

The sources said many army vehicles invaded, on Friday evening, the al-Khader town, south of Bethlehem, and clashed with dozens of local youths, who hurled stones on them.

The army fired several live rounds, rubber-coated steel bullets and gas bombs; one child, 14 years of age, was shot with a live round in his thigh, while many Palestinians suffered the effects of tear gas inhalation.

In addition, the soldiers kidnapped Anas Ismael Mousa, 20, from the al-Khader town, south of Bethlehem, while he was in Jerusalem.

The army said Mousa was wanted by the military, and was moved to an undisclosed interrogation facility.

The soldiers also summoned for interrogation, Daoud Mahmoud Salah, from al-Khader, after stopping him and examining his ID card, while he was in Jerusalem.