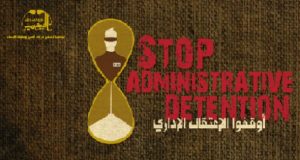 Riyad al-Ashqar, the media spokesperson of The Palestinian Prisoners’ Center for Studies, has reported that the Israeli occupation authorities issued 729 arbitrary Administrative Detention orders, since the beginning of this year, and that most of the orders were renewals of previous ones.

Al-Ashqar stated that these numbers are a %35 increase of the same period of last years, when Israel issued 493 orders.

“This is very serious, very dangerous; in the past Israel used to issue such numbers of orders every few years – now, we are witnessing this serious increase in just few months,” he added, “Israel uses this policy to hold hundreds of prisoners captive, without charges or trial, and largely keeps renewing them.”

He added that among the 729 orders, 433 were renewals of existing ones, with some detainees receiving renewals for the eighth consecutive time, and that the extensions are usually between two and six months each time.

He was kidnapped on July, 7, 2013, and his Administrative Detention orders were renewed eight consecutive time since then.

Furthermore, Israel issued new Administrative Detention orders against 296 detainees, who were kidnapped in different parts of the occupied West Bank, including Jerusalem.

The Administrative Detention orders that were issued since the beginning of this years are distributed as follows;

Al-Ashqar called on various international, legal and human rights groups, to act on ending the illegal Israeli policies, holding hundreds of Palestinians captive for extended periods, including many years, without charges or legal justification.

He also urged the Palestinian Authority to head to international courts, as Administrative detention is immoral and illegal.