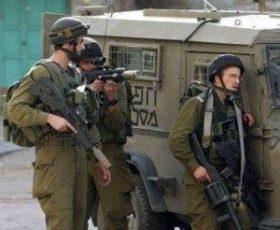 The Palestinian Prisoners Society (PPS) has reported, Saturday, that Israeli soldiers have kidnapped two Palestinians from the southern West Bank district of Hebron; one was taken prisoner from his home while the other was abducted at a military roadblock.

The PPS said the soldiers invaded and searched several homes in Hebron city, and kidnapped one Palestinian, identified as Rami Hamdi Yousef al-Dijon, 33.

It added that another Palestinian, identified as Mohammad Ghaleb Abdul-Qader D’eis, 21, was kidnapped at the Container Roadblock, south of Jerusalem.

The kidnapped Palestinian is from Bani Neim town, east of Hebron.

Media sources said the soldiers, stationed across the border fence, fired many rounds at homes in the area between the al-Maghazi and the al-Boreij refugee camps, in central Gaza.