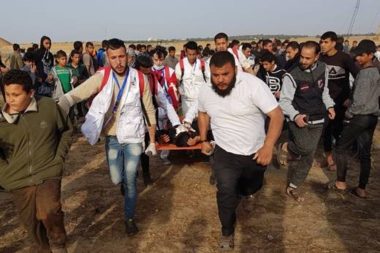 On Friday, 26 April 2019, in excessive use of force against peaceful protesters on the 56thFriday of the Great March of Return and Breaking the Siege, Israeli forces wounded 110 civilians, including 37 children, 3 women, 4 paramedics, and a journalist, in the eastern Gaza Strip.  Two of those wounded sustained serious wounds.

Hundreds of protesters, including children and women,  gathered adjacent to the border fence with Israel in front of each encampment and its vicinity tens  and hundreds of meters away from the fence. The protesters chanted slogans, raised flags, and in very limited incidents attempted to approach the border fence and throw stones at the Israeli forces.

Although the protesters gathered in areas open to the Israeli snipers stationed on the top of the sand berms and military watchtowers and inside and behind the military jeeps, the Israeli forces fired live and rubber bullets in addition to a barrage of tear gas canisters. The Israeli shooting, which continued at around 19:00, resulted in the injury of 110 civilians, including 37 children, 3 women, 4 paramedics, and a journalist.