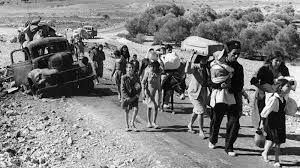 More than 5.6 million Palestinians are registered by United Nations (UN) as refugees, after seven decades of the Palestinian catastrophe or Nakba that began when Israel expelled more than 700,000 Palestinians from their homes in historical Palestine, declaring it the state of Israel, in 1948.

The Palestinian refugee population is distributed in different Near East regions, including the Gaza Strip, West Bank, Jordan, Lebanon and Syria. Many hundreds of thousands of refugees live in extremely difficult circumstances in those regions, particularly in Syria and Lebanon, with no prospect for a just solution to their plight.

Since 1948, the number of Palestinian refugees has multiplied nine times, resulting in the figure of 5.6 million refugees today.

Palestinian WAFA News Agency said that the figure does not include the tens of thousands of Palestinians who fled to nearby Arab countries, during the 1967 Israeli war on Arab and Palestinian territories.

The Palestinian people’s plight or the Nakba has remained the longest in modern history, while the UN has proven unable to apply all of its resolutions pertaining to the Palestinian cause.

Most important of those resolutions is United Nations General Assembly Resolution number 194, issued in December, 1948.

The resolution stipulated that all Palestinians, who were displaced by the Israeli-Arab war of 1948, have the right to return back to their home towns and villages, in historic Palestine.

The right to financial compensation for those forcibly displaced, was also specified.