One Palestinian injured at the Weekly Kufur Qaddoum March 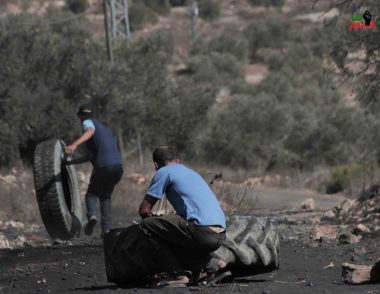 A Palestinian man was injured on Friday when Israeli occupation forces violently dispersed the weekly demonstration against the settlement in Kufur Qaddoum village in the northern West Bank district of Qalqilia, the Palestinian Information Center reported.

Some Palestinians suffered severe breathing difficulties as a result of inhaling toxic tear-gas used as a crowd control measure by Israeli forces.

Palestinians in and around the area have been holding weekly marches, every Friday for 17 years, in an expression of their rejection of the illegal Israeli settlements, the apartheid wall and the closure of the local road that connected the town to the northern West Bank.