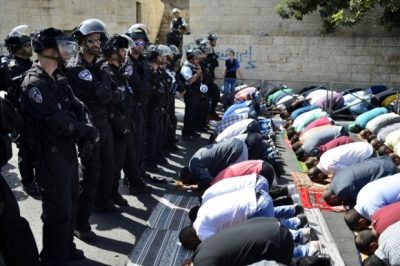 Israeli police, on Friday, imposed new restrictions on Muslim worshipers who perform prayers five times a day, at the ancient holy Islamic shrine of Al-Aqsa mosque, in the occupied city of East Jerusalem.

Local sources told media outlets that during the Friday Muslim sermon, Israeli police forces shut down a number of gates to the mosque and that much fewer worshipers were allowed to enter the holy site. As crowds of men, women and children, gathered around the gates, Israeli police responded by firing sound grenades to disperse the worshipers.

Sources added that the police threatened worshipers to stay away from the gates or else a fine of 5,000 New Israeli Shekels ($1400 US), will be imposed on them.

Two Palestinians, Mahdi Sayyad and Yousef Alshawish, received police warrants. Ahmad Alshawish told Quds News “We were praying close to the Bab Hatta gate, just outside of the Al-Aqsa mosque, as the police forces denied us access inside the mosque. Right after we completed our prayer, police personnel began firing sound grenades towards us.”

According to Palestinian experts on Jerusalem affairs, Palestinian Muslim worshipers in either Al-Aqsa mosque or other place of worship, have been given instructions by concerned religious bodies, to follow safety measures to combat the Coronavirus.