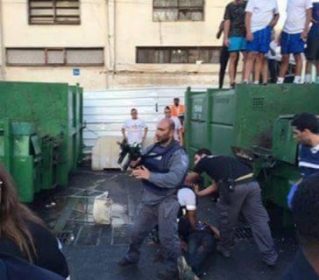 Israeli sources have reported, on Thursday evening, that two Israelis were injured when a Palestinian reportedly stabbed them before he was shot dead by an armed Israeli man, in the coastal city of Netanya.

Israeli daily Haaretz said the Palestinian stabbed a 40-year-old ultra-Orthodox man, and a 62-year-old woman, before an armed Israeli shot him dead. The two wounded Israelis are said to have sustained moderate and mild injuries.

The Palestinian was later identified as Wael Yousef Abu Saleh, 46, from the Shweika area, in the northern West Bank city of Tulkarem.

Haaretz also stated that the police initiated a search in the entire area of the attack, as they believe another Palestinian might have been involved in the incident, and that the Police used a helicopter in the search.

The attack is the second on Thursday, as in the morning an Israeli girl, 13, was stabbed and killed by a Palestinian in Kiryat Arba’ illegal colony, in the southern West Bank city of Hebron.

According to Haaretz, the girl was sleeping in her home when she was stabbed, and that an armed Israeli guard was also stabbed and injured when he rushed to the scene before another guard shot and killed the Palestinian.