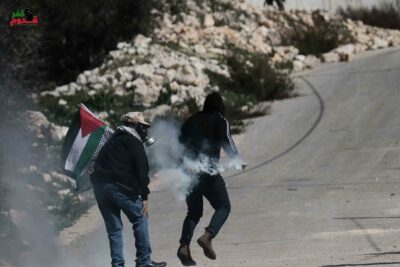 Israeli soldiers attacked the weekly Friday protest in Kufur Qaddoum village, east of Qalqilia in the northern part of the West Bank. The soldiers used tear gas and rubber-coated steel bullets to attack the demonstrators.

One teen was shot in the hand by a rubber-coated steel bullet and had to be taken to a nearby hospital. Other demonstrators suffered from tear gas inhalation, and were treated on site.

According to witnesses, the Israeli army fired teargas and rubber-coated steel rounds at demonstrators as they marched on the main street of the town toward the Israeli Annexation Wall that was constructed illegally on village land.

Morad Eshteiwi, media spokesperson for the Popular Committee Against the Wall and Settlements in the northern West Bank told reporters that the injured young man was shot in the hand, while several others who suffered from the effects of tear gas were treated at the scene.

Kufur Qaddoum has been the site of weekly protests again the Wall and Israeli settlements since 2011. The protests generally involve marches and chanting, as well as stone throwing when the Israeli military attacks the marches.

Kufur Qaddum is a village of around 3,500 people west of Nablus and east of Qalqilia. The weekly protests began in the village soon after the Israeli military erected a roadblock at the village entrance to prevent Palestinians from using their road — which was re-routed by the Israelis to run through the Kedumim settlement. Even in emergencies, Palestinians are not allowed to use their former road.

The Jewish-only settlement was constructed on land owned by the people of Kufur Qaddoum, which was stolen and taken over by Israeli settlers.

Every Friday since 2011, about 400-500 villagers gather at their end of the road to protest and demand the reopening of their road and land.