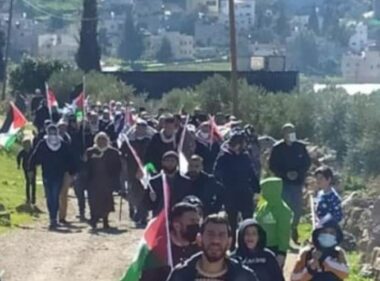 Israeli soldiers attacked, Friday, the nonviolent procession in Beit Dajan village, east of the northern West Bank city of Nablus, and injured sixteen Palestinians, in addition to causing dozens to suffer the effects of teargas inhalation.

The Palestinians marched from the village heading towards their lands, where illegal Israeli colonists installed an outpost, three months ago.

The soldiers resorted to the excessive use of force against the protesters, and shot fifteen with rubber-coated steel bullets, in addition to causing dozens to suffer the effects of teargas inhalation.

The soldiers also shot one Palestinian with a gas bomb in the face before he, and other injured Palestinians, were rushed to local hospitals.

Nasr Abu Jaish, the coordinator of the Popular Committee for Defending Palestinian Lands, who also suffered the severe effects of teargas inhalation, said this procession is the sixteenth in three months and added that the Palestinians will continue their protests until the removal of the illegal outpost, built on stolen lands.