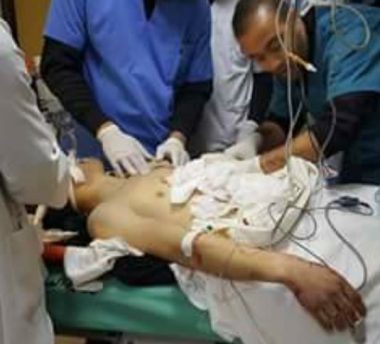 Two Palestinians have been injured; one suffered a life-threatening injury, on Friday evening, after Israeli soldiers stationed in fortified military towers, across the border fence, opened fire at several Palestinians in their lands, close to the border fence, in Beit Lahia, in the northern part of the Gaza Strip.

Medical sources in Gaza said the soldiers fired many live rounds, including sniper fire, at the Palestinians, seriously wounded one Palestinian with a bullet in his abdomen, while another Palestinian suffered a moderate injury in his right leg.

Palestinian ambulances sped to the scene of the Israeli attack, and rushed the two Palestinians to the Indonesian Hospital, in northern Gaza.

Also on Friday evening, the soldiers opened fire at Palestinian shepherds and their herds, in northern Gaza.