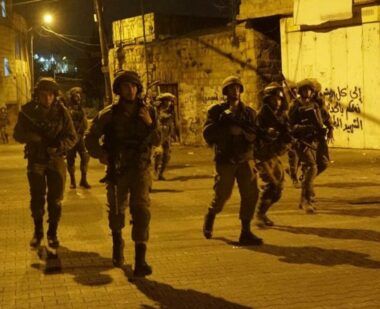 On Thursday dawn, Israeli soldiers injured several Palestinians, including one who suffered life-threatening wounds, in several parts of the occupied West Bank.

The Palestinian Health Ministry has confirmed that a young man, 20, is in critical condition after Israeli soldiers shot him in the chest in the Za’ta area in Beit Ummar town, north of Hebron in the southern part of the West Bank.

The Health Ministry said the soldiers shot the young man in the chest and added that the bullets exited from his back, compounding the seriousness of his wounds.

The Palestinian was shot during protests that erupted after several army jeeps invaded Beit Ummar.

The army also invaded the Al-‘Arroub refugee camp north of Hebron, leading to protests, before the soldiers fired many live rounds, gas bombs, and concussion grenades.

Medical sources said many Palestinians, including several in their homes, suffered the effects of tear gas inhalation.

In Jenin, in the northern West Bank, the soldiers shot a Palestinian woman, 39 years of age, with a live round in the leg while standing in front of her home when the army invaded Jaba’ town, south of the city. Palestinian medics rushed her to the Jenin Governmental Hospital.

In Bethlehem, several army jeeps invaded the Deheishe refugee camp south of the city, leading to protests, and shot a young man with a live round in the leg.