Archbishop Hanna: “Palestinian Response To Israeli Government Should Be Unity” 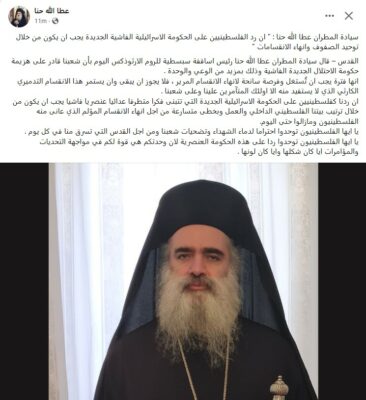 Theodosios Atallah Hanna of Sebastia, the Archbishop of Sebastia from the Greek Orthodox Patriarchate of Jerusalem, said that “the Palestinian response to the new fascist Israeli government should come in the form of complete unity and steadfastness.”

Father Hanna stated that the Palestinians, who remain steadfast and determined, can defeat the new Israeli government with more unity and awareness.

“This era requires the Palestinians to end all internal divisions and unite,” he said, “This devastating lack of unity and internal divisions are disastrous and only benefit those who conspire against us and seek our people’s defeat,” father Hanna added.

“Dear Palestinians, unite, for the blood of the martyrs, for people’s sacrifices, and for Jerusalem that is being stolen from us, unite…,” he said, “Unite to counter this racist Israeli government, for your unity is your strength to counter the conspiracies against you and your struggle for liberation.”

Archbishop Hanna: “We Salute Our People In Sheikh Jarrah, In Every Part Of Jerusalem” – – IMEMC News