Organizations Call on Obama to Investigate Israeli Killing of US Citizen 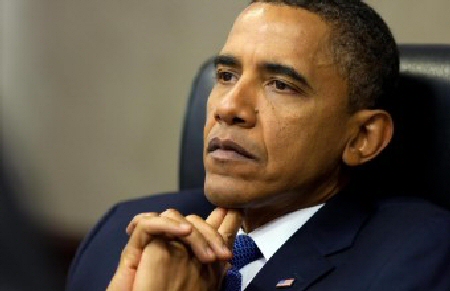 US rights and faith organizations, Wednesday, called on US President Barack Obama to investigate Israeli army killing of a US citizen of Palestinian origins, according to a press release.

Fifteen organizations sent a letter to Obama calling on him to demand that Israel publicly release all evidence related to the recent investigation into the fatal shooting of Mahmoud Shaalan, by Israeli soldiers.

On February 26, Shaalan, a 16-year-old Palestinian-American born and raised in Florida, was shot by Israeli soldiers multiple times at a checkpoint near the Beit El settlement, just north of Ramallah in the occupied Palestinian territory. After Shaalan was shot, soldiers reportedly stripped his body, left him bleeding on the road for more than two hours, and prevented a Palestinian ambulance from approaching.

Israeli authorities have, according to WAFA, informed U.S. officials that they found no criminal wrongdoing and that Israel will no further pursue the case. Israel has not released any details or evidence collected from the investigation.

“We are also calling on the administration to conduct an independent investigation into the killing of Mahmoud Shaalan,” said Raed Jarrar, government relations manager at American Friends Service Committee. “As the largest supplier of military aid to Israel, the U.S. has a responsibility to make sure weapons we supplied were not used in this unlawful killing.”

“At a time when cameras have documented officer-involved shootings of civilians in the US, it is shocking that the White House has yet to publicly demand that Israel release the video footage from its own fatal shooting of U.S. citizen Mahmoud Shaalan,” said Sunjeev Bery, Middle East North Africa Advocacy Director for Amnesty International USA. “It is time for the Obama Administration to publicly demand that Israel release all video footage from the military checkpoint where Israeli soldiers fatally shot a U.S. citizen.”

“Israel has enjoyed utter impunity for killing United States citizens Rachel Corrie, Furkan Do?an, and now Mahmoud Shaalan, as well as gravely injuring many more,” said Maria  LaHood, Deputy Legal Director at the Center for Constitutional Rights. “It is long past time for the United States government to stand up to Israel and demand transparency and accountability for killing our citizens, and to conduct its own thorough investigation.”

“The Jewish tradition teaches, that ‘whoever destroys a soul, it is considered as if he has destroyed an entire world,’” said Rabbi Joseph Berman, Manager of Government Affairs and Grassroots Advocacy Jewish Voice for Peace. “When the state has taken a life, they have destroyed an entire world and they are obligated to investigate and take responsibility for their actions.”

Signatories of the letter include the American Friends Service Committee (AFSC), the Presbyterian Church (USA), Amnesty International USA, the Center for Constitutional Rights, Defense for Children International – Palestine, and the National Lawyers Guild.