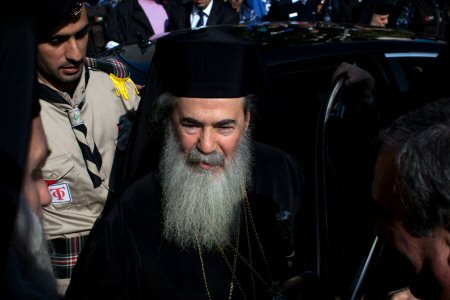 Orthodox Christian properties in Jerusalem, Jaffa and Caesara are being sold at very low and questionable prices to companies in offshore tax havens.

Documents obtained by the Israeli newspaper appear to show an unknown company purchased a three story office building on King David Street, in Jerusalem, for $850,000 – an area with prime retail spaces.

Another deal has also included the sale of an area of 2.3 dunams (0.0023 square kilometres), in the Al-Baqaa neighbourhood of Jerusalem, for $350,000; an extremely low valuation for the highly sought after area.

Elsewhere in the region, some six dunams (0.006 square kilometres), near the Clock Tower square in Jaffa and consisting of dozens of businesses, have been sold for a mere $1.5 million, and 430 dunams (0.43 square kilometres) in Caesarea, including large parts of the national park, were sold for only $1 million.

Days of Palestine reports that, while the reason for the numerous sales and the low prices remain a mystery, sales records show that the areas sold have meanwhile been resold to another company, also registered in a tax shelter. As the purchasers are foreign companies in tax havens, it is impossible to acquire any information about the new owners.

Consequently, thousands of Jerusalem residents are living in uncertainty regarding the tenures on their homes. Some have had difficulties selling their properties or even installing lifts in their buildings.

This week, Greek Patriarch Theophilus III met with Pope Francis to express his concern at the Christian real estate situation.

It is reported that the Patriarch is fighting against Israeli politicians who want to confiscate land in Jerusalem and the Israeli-Jewish organisation Ateret Cohanim that is trying to claim ownership of certain properties allegedly sold to it by the former Patriarch.

However, the Theophilus III is also under fire from his community for the unexplained sales of what are considered trust properties.

The Vatican responded to the request, saying it was available to follow the matters “in the most appropriate manner”.