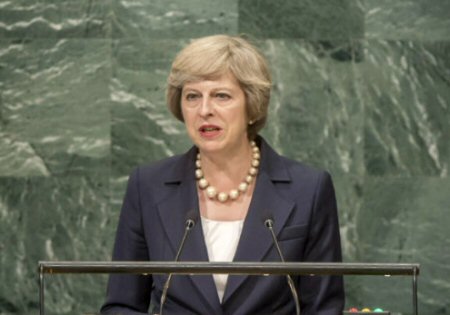 Foreign Minister Riyad Malki criticized, on Thursday, remarks British Prime Minister Theresa May made the day before regarding the centennial of the Balfour declaration, describing them as “offensive and unacceptable.”

“Ms. May boasted about this declaration, which willfully and determinedly disregarded the existence of the Palestinian people and denied their national rights,” said Malki in a statement, WAFA reports.

“Most disturbing is the British Prime Minister’s tone of condescension,” he said. “Even when attempting to sound mindful of what she called ‘sensitivities’, Ms. May failed to acknowledge the Palestinian people and their suffering or recognize their inalienable right to self-determination, which Israel continues to deny.”

The Foreign Minister went on to say that “in line with the Balfour Declaration’s original racism and disdain for the Palestinian people, Ms. May glossed over the reality and facts and consciously chose to refrain from addressing the continued injustice that the Palestinian people suffer because of the chain of events that this declaration had set off.”

Malki said that May’s eagerness to celebrate the declaration “is a testament to the colonial, racist mentality that exacted injustice and suffering on peoples around the world. That mentality rationalized Britain’s illegitimate gifting of another people’s homeland to a third group and simultaneously disregarded the indigenous people’s national identity and rights.”

“If Prime Minister May wants to show British sensitivity to the ongoing pain and suffering of the Palestinian people, she should start out by acknowledging Britain’s culpability for this ongoing injustice and recognize the Palestinian people’s inalienable rights. The legacy of injustice and suffering of the Balfour Declaration runs through the generations and has touched the lives of every Palestinian for the past hundred years. This is a shameful legacy; one that Britain must acknowledge and make right.”