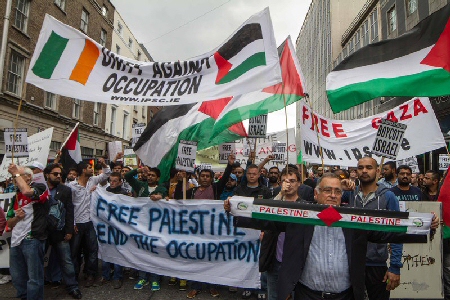 The Ireland Palestine Solidarity Campaign announced, on Monday, that its accounts had been closed by the Bank of Ireland.

The IPSC is seeking answers from the bank, which would only say the organization no longer met its “risk appetite.”

In a statement, the IPSC said the move appeared to be “part of a campaign orchestrated by the Israeli government.”

The group also described the bank’s decision as “an attack on Palestinian rights and BDS,” the boycott, divestment and sanctions movement.

Kevin Squires, the IPSC’s coordinator, told TheJournal.ie that “Bank of Ireland’s silence speaks volumes. Honestly, it’s hard to not view this as part of a wider campaign which has seen banks close accounts in the UK, Austria and France.”

Squires said that the campaigning group had sent just $1,350 to Palestine in the last financial year, mostly to buy Palestinian scarves.

Politicians in Ireland have slammed the bank’s unexplained move.

Mary Lou McDonald, deputy leader of the political party Sinn Féin, said that the closure was “outrageous” and “insulting to the Palestinian people.”

“Bank of Ireland should reopen the account, and offer a public explanation as to why this happened in the first place,” said McDonald.

Continue reading at the the Electronic Intifada.