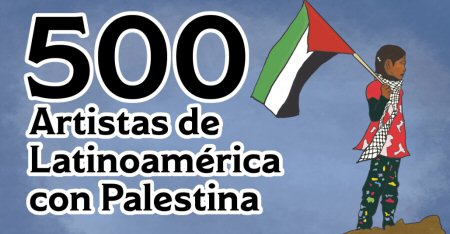 April 19, 2018 — Over 500 Latin American artists have publicly endorsed the Palestinian call for a cultural boycott of Israel. They pledged not to perform or exhibit in Israel  and to decline Israeli funding, until Israel respects the comprehensive rights of the Palestinian people under international law.

The signatories condemned Israel’s apartheid regime, which they describe as “the system of segregation imposed on Palestinians by the Israeli government.” According to Peruvian poet Marlet Rios, “Israel has mocked the international community and UN resolutions with complete impunity.”

The statement was welcomed by the Palestinian Performing Arts Network (PPAN) as an effective act of solidarity with Palestinians. PPAN also noted the statement comes as “Israeli army snipers are brutally implementing a shoot-to-kill-or-maim policy against unarmed Palestinians in the occupied and besieged Gaza Strip,” who are peacefully protesting “to assert the UN-sanctioned right of Palestinian refugees to return to their homes from which they were ethnically cleansed during the 1948 Nakba.”

In a video message, Palestinian filmmaker May Odeh and Palestinian poet Remi Kanazi thanked their Latin American colleagues for supporting the ethical, rights-based movement for a cultural boycott of Israel.

This pledge is part of the growing,  Palestinian-led global movement for Boycott, Divestment, and Sanctions (BDS) for Palestinian rights. According to Isabel Rikkers, spokesperson for the Israel boycott initiative in Colombia, “BDS promotes the boycott of Israel as a non-violent way to pressure the state to respect Palestinian human rights.”

Israel uses culture to present itself to the world as a liberal democracy when, in reality, Israel, on top of being a system of military occupation and apartheid, violates Palestinian cultural rights through the destruction of theaters, the closure of cultural centers, and the arrest of artists.