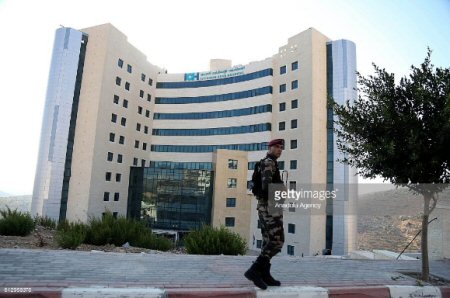 A Ramallah hospital amputated, on Thursday, the left leg of Gaza child Abdul Rahman Noufal, aged 13, from Nuseirat refugee camp, who was shot in the leg with an explosive bullet that ruptured his bones during protests at the Gaza border with Israel, according to family members.

Noufal underwent surgery at a Gaza hospital, following his injury, where doctors mulled over the possibility of amputating his leg but decided to wait and see if there were other options.

Noufal’s father, Yamen, appealed with PA president Mahmoud Abbas to intervene to get his son to receive medical treatment in Ramallah, to save his leg, because Gaza hospitals were not capable of it.

Abbas called on Civil Affairs head Hussein al-Sheikh to immediately get in contact with the Israeli authorities to get a permit for Noufal to leave Gaza and travel to Ramallah for medical treatment.

Israel agreed. on Wednesday, to allow Noufal to leave Gaza for medical treatment in Ramallah, according to the Civil Affairs Authority.

According to WAFA, it said in a statement that, following intervention with the Israeli authorities on behalf of Abdul Rahman Noufal, Israel has agreed to grant the child a permit to leave Gaza, to receive medical treatment at a Ramallah hospital.

Noufal arrived at Ramallah’s Istishari Hospital on Wednesday evening. He was accompanied by his grandmother.

However, after doctors realized that keeping his leg would endanger his life, they decided to amputate it, according to Noufal’s parents.