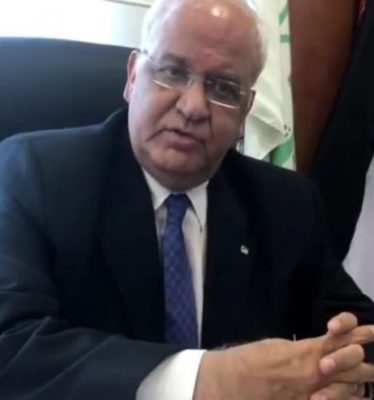 The Palestinian Authority (P.A.) has announced, Tuesday, its in tension to head to the International Criminal Court (ICC) to prosecute Israel over the pending illegal demolition on al-Khan al-Ahmar Palestinian village.

The Palestinian official also called on the ICC to expedite the launching of the investigation into Israeli war crimes, and to issue a warning against the demolition and displacement of al-Khan al-Ahmar.

Dr. Erekat said in a video which was also posted to the official Twitter account of the Negotiations Affair Department of the PLO, that he urged Bensouda to convene with the local council of al-Khan al-Ahmar and with the head of the Committee against the Wall and Colonies, Minister Waleed Assaf.

|Assaf: “We Will Head To International Courts Over Al-Khan Al-Ahmar Decision”|

“We are determined to pursue our fight at the General Assembly, Human Rights Council and the International Court of Justice,” Dr Erakat added, “The United States, after taking this decision to close the office (the Palestinian Mission in the US), to move the embassy, to cut the aid, to dry UNRWA sources, to consider settlements legal because their National Security Advisor used the term ‘housing projects’ to describe the illegal settlements, for the first time since 1967; I don’t think that these people can be part of any peace process, or negotiations, because they are really part of the problem, not part of the solution, and I think the only way they can meet us in any negotiations room is if Benjamin Netanyahu can announce them (Kushner, Friedman, Greenblatt …) as part of the Israeli negotiations team.”

Erekat also slammed the U.S. decision to close the PLO office in Washington, and the earlier decisions to cut off $200 million for the UN relief agency (UNRWA), in addition to moving the US embassy in Israel from Tel Aviv to Jerusalem.

Dr. Erekat: a submission on the case of #KhanAlAhmar was delivered to the #InternationalCriminalCourt this morning urging Madam Bensouda to meet with the council of Khan Al-Ahmar… and we hope that an official judicial investigation can be opened as soon as possible. #Palestine pic.twitter.com/hJNo9lAJMH