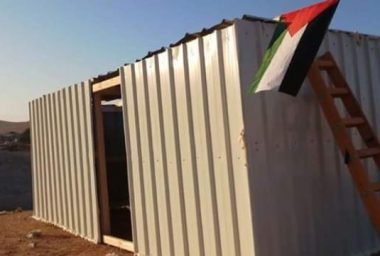 The new village is meant to send a message that the Palestinians will remain steadfast on their lands, despite Israel’s escalating violations and colonialist policies, especially as the army is preparing to demolish al-Khan al-Ahmar, the activists said.

Palestinian Minister Waleed Assaf, the head of the National Committee against the Annexation Wall and Colonies, said the activists built small homes using wood and steel, to house the families, and to send a message that the Palestinians will build and will affirm their rights to remain steadfast on their lands.

He stated that “the birth of the al-Wadi al-Ahmar village, came just meters away from the illegal Kfar Adumim illegal Israeli colony, which was built on Palestinian lands in al-Khan al-Ahmar.”

He added that the Palestinians will continue to challenge the illegal Israeli colonialist policies, and will continue to affirm their legitimate right to keep building, and remain steadfast on their lands. 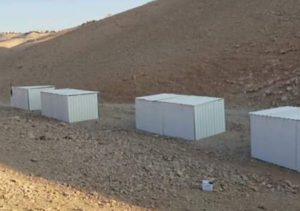 “Our message to the world is that the Palestinians will never abandon their rights; they will defend their lands, including in Area “C” of the occupied West Bank,” he said, “They are all part of Palestine, and will we build everywhere to protect them.”

He also stated that Israel wants to control al-Khan al-Ahmar as part of its illegal colonialist plans, especially after it declared 38% of Area “C” as “state land.”

The destruction of the community would displace 35 Palestinian families, so that Israel can expand its illegal Kfar Adumim colony.

It is worth mentioning that, a week ago, the Israeli High Court has granted a green light to the army to demolish al-Khan al-Ahmar within seven days, after rejecting an appeal against the destruction of the community.

Following the Israeli ruling, the Head of the National Committee against the Annexation Wall and Colonies, Waleed Assaf, said the Palestinian Authority will be heading to international courts.