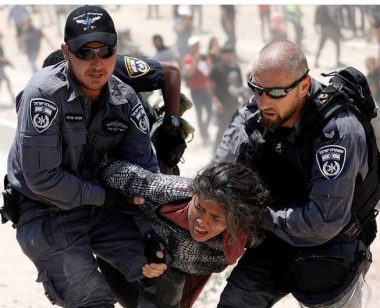 As hundreds of soldiers and police officers have been deployed around al-Khan al-Ahmar Palestinian Bedouin community, southeast of occupied Jerusalem, in preparation for ethnically cleansing it, and displace the residents, groups of fanatic illegal Israeli colonists gathered in the area to “celebrate” the assault.

The colonists came from the illegal Kfar Adumim colony, built on private lands owned by Palestinians from Abu Dis and Hizma towns.

While Israeli soldiers continued to resort to the excessive use of force against innocent civilians, communities of shepherds, with more than half of them are children, the colonists decided to “celebrate the event,” awaiting the complete destruction of the Palestinian community.

On its part, the Arab League strongly denounced the Israeli crimes against al-Khan al-Ahmar and Abu Nuwwar communities, and said that these policies are war crimes as they target innocent, unarmed civilians, displacing them and devastating their lives and the lives of their families.

It added that the removal of displacement of the Palestinians only aims at the construction and expansion of Israel’s illegal colonies, built in direct violation of International Law and the Fourth Geneva Convention.

“These plans aim at completing the isolation of occupied Jerusalem and its suburbs from the rest of the West Bank,” Arab League assistant Secretary General, Sa’id Abu Ali, said, “Israel is acting on displacing entire communities, and at the same times approving the construction of thousands of units for illegal settlers.”

This plan, he said, reflect the Israeli intentions and calculated decisions to finalize E1 colonialist project, which aims at annexing all parts of East Jerusalem, and isolating the indigenous Palestinians from the rest of the occupied West Bank, to strengthen Israel’s illegal and deadly military occupation of Palestine.

It is worth mentioning that the Israeli army and police prevented nine European Union consuls from entering al-Khan al-Ahmar.