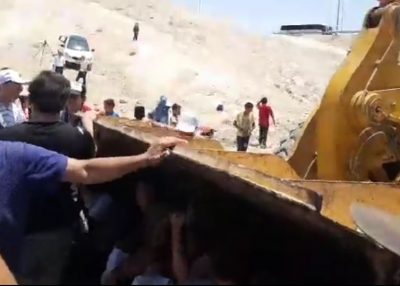 Israeli soldiers attacked, Wednesday, dozens of nonviolent Palestinian, Israeli and international peace activists, and the local residents of al-Khan al-Ahmar community, east of occupied Jerusalem, during the Israeli attempts to demolish and displace the Palestinian community.

The Palestinian Red Crescent Society said its medics provided treatment to approximately 36 persons, including four who were moved to hospitals for further treatment.

The soldiers also abducted ten peace activists, including one woman, during the violent military assaults against the nonviolent protesters, who gathered to protect the Palestinian community.

Israeli army bulldozers eventually left the area, while the soldiers remained in full deployment, as the army insists on demolishing the community.

It is worth mentioning that the Israeli High Court decided, in May of this year, to go ahead with the demolition and displacement of al-Khan al-Ahmar.

Earlier Wednesday, the soldiers demolished 40 residential sheds, and barns, in Abu Nuwwar, a nearby Bedouin community.

Bedouin Palestinian communities continue to be displaced due to Israel’s illegal occupation and policies, repeatedly ousting them the same way they were exiled from lands they inhabited in the Negev and other areas, following the establishment of the state of Israel in the historic land of Palestine in 1948.

Al-Khan Al-Ahmar is inhabited by 181 Palestinians, more than half of whom are children. They live without basic services, including running water, electricity, health services, and are surrounded by illegal Israeli colonies.

The inhabitants are from the Negev Desert, but were forcibly removed and displaced after the establishment of Israel in the historic land of Palestine and settled in the plains area near Jerusalem.

They have the deeds to the land, all legal and registered as part of ‘Anata village, the nearby Palestinian town. But Israeli authorities have refused to recognize those deeds, issued by the Palestinian Authority in the West Bank.