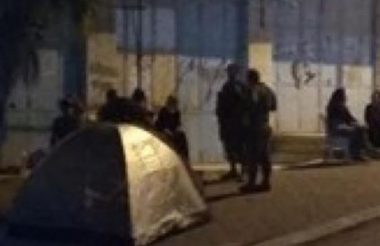 On Wednesday evening, a group of Illegal Israeli colonizers, living in Ramat Yishai Colony, which was built on private Palestinian lands in Tal Romedia neighborhood in the center of the southern West Bank city of Hebron, attacked many Palestinians, wounding three, before the soldiers abducted one Palestinian.

The WAFA Palestinian News Agency said the Israeli assailants attacked many Palestinians, leading to a scuffle with the locals, and injured Samir al-Mohtaseb, Yasser Abu Markhiyya and Bassam Abu Aisha.

It added that Israelis soldiers also attacked a number of residents and abducted Abed al-Fakhouri.

On Wednesday at night, an Israeli colonizer and his wife installed a tent on the sidewalk of the road in Tal Romedia.

The tent was installed on the sidewalk in front of a home of a Palestinian identified as Rami Abu Aisha, by a known fanatic colonist, an Israeli-American, identified as Baroch Marzel.

Merzel and his wife, along with other assailants installed the tent, before several colonizers came over to support their violation, while locals gathered to protect their homes in fear of further escalation.