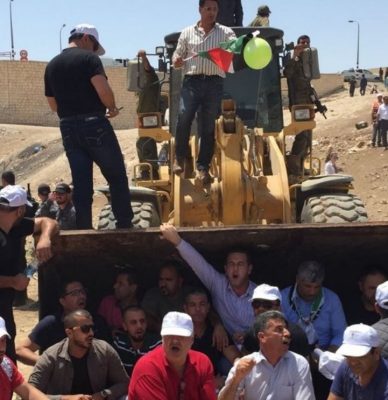 The peace activists formed a human chain in front of the Israeli bulldozers which started bulldozing lands and leveling the area to advance towards al-Khan al-Ahmar to demolish it, while the soldiers assaulted, injured and abducted many of them, including journalists, and threatened to use live fire if they do not leave.

It is worth mentioning that the army already demolished, earlier Wednesday, several residential structures and sheds in Abu Nuwwar community, in preparation for the demolition of al-Khan al-Ahmar.

Local, Israeli and international peace activists have been constantly present in the area for the last two weeks, attempting to prevent Israel from implementing its illegal plans that aim at the destruction of the communities to confiscate the lands for its colonialist activities.

The community is inhabited by 181 Palestinians, more than half of them are children, without basic services, including running water, electricity, health services, and are surrounded by illegal Israeli colonies.

The inhabitants are from the Negev Desert, but were forcibly removed and displaced after the establishment of Israel in the historic land of Palestine, and settled in the plains area near Jerusalem.

They have the deeds to the land, all legal and registered as part of ‘Anata nearby Palestinian town.

Abu Nuwwar is one of 45 Bedouin communities in al-Khan al-Ahmar, surrounded by several illegal colonies, and facing constant harassment, demolitions and complete destruction as part of Israel’s so-called E1 Project, which aims at confiscating 12.000 Dunams extending from occupied East Jerusalem to the Dead Sea.

This project also aims at separating the central part of the West Bank from the southern parts, by creating a chain of colonies, military and police centers.