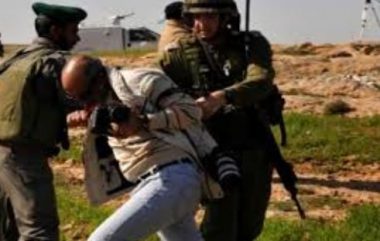 The Palestinian Journalists’ Syndicate issued a statement, Thursday, strongly denouncing the Israeli army’s assault of journalists while documenting the army‘s invasion into al-Khan Ahmar Bedouin community, east of Jerusalem, in preparation for demolishing it.

The Syndicate said the soldiers attacked many journalists, imposed fines and issued traffic tickets targeting dozens of media vehicles, in addition to illegally confiscating a vehicle owned by the Palestinian News and Info Agency (WAFA).

It added that the soldiers assaulted journalist, Mohammad al-Lahham, who is also a member of its General Secretariat.

The Syndicate said the Israeli attack violates various international resolutions, including Security Council Resolution #2222, which calls for the protection of journalists.

It added that the targeting of journalists is a deliberate illegal policy aiming at concealing crimes and serious violations.

The Syndicate expressed its serious concern regarding the seriously escalating Israeli violations and crimes against the journalists in Palestine and called for the immediate release of all imprisoned reporters.