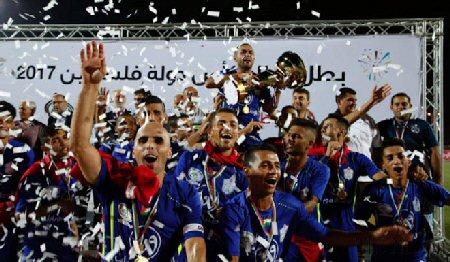 “The Palestine Football Association regrets to announce the postponement of the Palestine Cup Final Match between Balata FC and Khadamat Rafah FC due yet another flagrant intervention by the Israeli occupation Authorities to deny Palestinians their basic right to play football,” it said in a statement, according to WAFA.

“Preparations for this final match of the Palestine Cup, which is one of Palestine’s two senior official competitions, have been finalized a few days ago, yet, the Israeli Occupation authorities are still denying entry permits to the Khadamat Rafah delegation under the convenient pretext of ‘security reasons’,” it said.

Out of the 35 people on the Khadamat Rafah delegation list, only four were approved; the club president, vice president, one doctor, and one single player. Two extra’ administrators would be approved provided they agree to undergo interrogation at the Israeli-controlled crossing between the West Bank and Gaza Strip, said the PFA.

The PFA called on FIFA and the six football confederations under its umbrella to help the Palestine Football Association safeguard its right to play football, to organize national competitions and participate in international competitions by taking effective measures to make sure football is played in Palestine without hindrance.