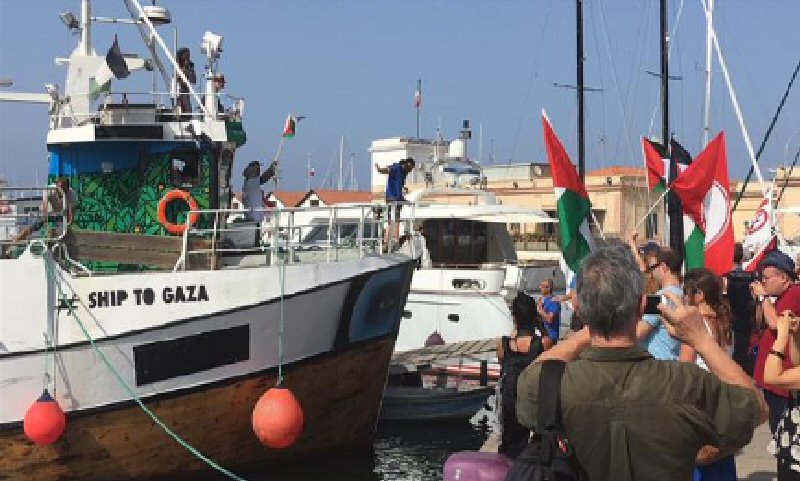 A picture showing several of the ships taking part in the Palestine Freedom Flotilla campaign as they near a port in Palermo, Sicily, on July 17, 2018. (Photo by freedomflotilla.org)

Activists from around the world have gathered in the Italian city of Palermo, and are engaged in the final stages of preparations for this year’s Palestine Freedom Flotilla campaign, Press TV/Al Ray reports.

Participants engage in the freedom campaign, in a gesture of solidarity designed to boost the morale of Palestinians, while highlighting to the world the dire situation in the Israeli-besieged Gaza Strip.

All four Freedom Flotilla boats arrived in Palermo on Monday. The al-Awda (Return), Freedom, Mairead and Palestine boats are reunited after traveling more than two months, sailing from Scandinavia to Sicily. They have traveled over 4,000 nautical miles and visited over 15 European ports. They will set sail for Gaza on Thursday.

“We are just showing the Palestinians that there are people that really care. Believe it or not, some people say we are taking our lives in our hands to go to help them, to bring some solace to them; to let them know that there are people out there that actually care about them,” said Joe Meadors, a former UN navy technician and flotilla participant.

Meanwhile, local activists and organizers of a pro-refugee protest have joined forces with pro-Palestinian activists in a unified show of support aimed at emphasizing the need for further initiatives as demonstrated by the freedom flotilla.

“The freedom flotilla is a grassroots, multinational movement to challenge the illegal inhumane blockade of Gaza, and to reach the conscious of the world that the governments are complicit with the blockade move…, because it is with the complicity of the Western governments that the blockade counties,” said David Heap, a pro-refugee activist.

“We are all supporting human rights so we are obviously going to support them. We are here to try and open the borders and stop the war,” said another activist.

Gaza has been under an Israeli siege since June 2007, which has caused a sharp decline in living standards as well as unprecedented unemployment and poverty. According to the UN, the stringent conditions threaten to render the territory uninhabitable by 2020.

Egypt closely cooperates with Israel in maintaining the siege by keeping Rafah, Gaza’s only land terminal that bypasses Israel, closed most of the time. The situation has seriously affected the Palestinian patients’ chances of seeking treatment abroad.

On May 31, 2010, Israeli commandos attacked one such flotilla, which was trying to take humanitarian aid to Gaza, in international waters in the Mediterranean, killing 10 activists onboard.

07/15/18 Further Strangulating Gaza, Israeli Authorities Add Restrictions on Movement of Goods in and out of Gaza