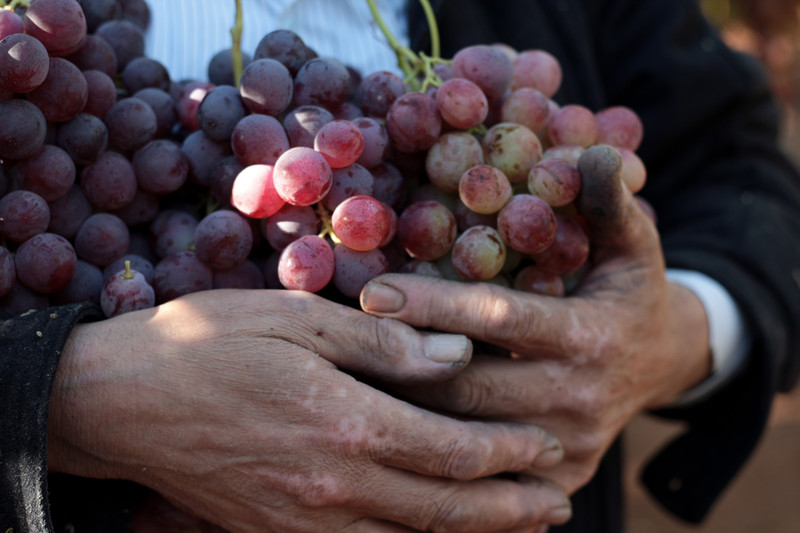 The al-Natsheh family vineyard, run by one of its founder’s sons, faces an uncertain future…

Palestine’s most famous crop is the olive, but not to be overlooked are its grapes. Best known for grape production is the Hebron area of the Israeli-occupied West Bank.

The al-Natsheh family vineyard in Hebron city was first planted in the 1950s, two decades after Daoud Salam al-Natsheh bought the 40 dunams of land (a dunam is the equivalent of 1,000 square meters) in 1932 for 250 Palestine pounds, the currency during the British Mandate.

Daoud Salam lived a long life and married three times. His children and their survivors – he had nine sons and seven daughters, though some have since passed away – inherited the vineyard.

His son Abd al-Aziz, 60, who was born during Daoud’s third marriage, manages the land.

According to Abd al-Aziz, the Israeli military built an army barracks on a hill overlooking the vineyard in 1968, a year after it occupied the West Bank. Then came the Kiryat Arba settlement, which has expanded over time and today surrounds the vineyard.

Abd al-Aziz said that the settlers in Kiryat Arba have never damaged the vineyard or attacked harvesters but he worried that Israel will eventually colonize the family’s land.

The profit generated from the vineyard, which is divided among Abd al-Aziz and his surviving siblings and his late siblings’ children, isn’t enough to live on, he said. Abd al-Aziz also owns a shop in Hebron.

The family hires a guard to protect the vineyard and contracts a farmer who serves as foreman during the annual grape harvest and makes sure the produce makes it to local markets.

“If we do not take care of our land, then it will be a wasteland,” Abd al-Aziz said.

For extensive photo coverage and additional info, continue reading at the Electronic Intifada.