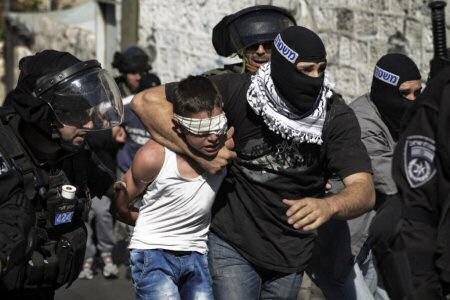 Several Palestinian child prisoners in Ofer prison revealed their experiences with torture and mistreatment to Palestinian lawyer Wael Awakah, including beatings and threats by Israeli occupation soldiers and interrogators from the moment of their arrest.

Awakah reported that Waleed Riyad al-Dali, 14 years old, a tenth-grade student and a resident of the village of Biddu in the Ramallah district, was seized on 28 September 2017 at 5:00 pm from the center of his village by undercover Israeli occupation soldiers disguised as Palestinians. He was assaulted and beaten by the soldiers, punched in the head and left bloody by their attack.

Waleed was then taken to a settlement while shackled and blindfolded in a military jeep. He reported being beaten by the soldiers rifle butts and kicked by them during the travel to the settlement. At the settlement military base, Waleed was interrogated; the interrogator threatened to break his hands, refused him food and directed curses and obscene insults at him.

Yazid Akram Humaidan, 15, also a resident of Biddu, was also seized on 28 September from the center of town by undercover Israeli occupation soldiers, who threw him to the ground, punched and slapped him. Yazid said that one of the undercover occupation soldiers stomped on his neck so hard that he feared for his life as he was beaten on the head and face with sharp blows.

Yazid also said that he was screamed at and cursed by interrogators at a nearby settlement and that he was physically weak and tired during interrogation as he had had surgery only two months before.

Hamada Jamal Abu Eid, 16, was also seized by occupation forces operating undercover in Biddu on 28 September. He said that one put a gun to his head before shooting in the air, causing him to fall to the ground where he was beaten on the body and head. He said that he was hit and slapped while being taken to interrogation at a nearby settlement, and that during interrogation himself he was subject to insults and curses.

Awakah said that Hamada continued to appear tired and ill during the interview, with severe and ongoing pain in his head. The three are among approximately 300 Palestinian children held in Israeli jails, mostly in Ofer and Megiddo prison, as well as 10 minor girls held in HaSharon prison.

In addition, the practice of sending children – especially Jerusalemite children – to house imprisonment, highlighted in the September 2017 report of Palestinian prisoners’ human rights associations, has continued. House imprisonment denies children the right to leave their homes, even for study or medical treatment in many cases, and forces parents and adults around them to become jailers at the threat of further punishment and imprisonment.

On 12 October, Jerusalemite teen Bilal Khalil Ghatit was ordered to home imprisonment with the imposition of an “electronic monitoring bracelet” on his ankle. He has already been held under house imprisonment since May, and has been unable to leave his home, go to school or visit relatives. His parents have also become prisoners; one of them must stay at home with him at all times. Bilal was seized in April 2017 by occupation forces who invaded the family home in the Sheikh Jarrah neighborhood of Jerusalem; he was released in May but ordered to house arrest. A ninth-grade student, he has been denied the ability to go to school.

Bilal’s father reported that he pays NIS 180 ($55 USD) for the electronic monitoring device; in the event of any malfunction of the device or even a loss of electricity in the home, the house is subject to violent raids by occupation forces, he noted, recalling the day of Bilal’s arrest, when his room was invaded as he slept and his brother beaten when he tried to intervene.

Another Palestinian child, Adam Hamdan, 14 from Ras al-Amud neighborhood of Silwan in Jerusalem, was also ordered to house imprisonment on 12 October; he was arrested on Tuesday, 10 October as he walked to school and accused of “throwing stones,” one of the most popular charges used by the Israeli occupation to criminalize and imprison Palestinian children and youth.

Samidoun Palestinian Prisoner Solidarity Network denounces the ongoing imprisonment, torture, mistreatment and abuse of Palestinian children at a systematic level by the Israeli occupation. We demand the immediate release of all Palestinian child prisoners in Israeli jails and urge greater international mobilization to support the hundreds of Palestinian children who are jailed each year, subject to solitary confinement and cruel and inhumane treatment, traumatic pre-dawn violent arrest raids and invasions of their homes, confiscation of their right to health and education – all as part of a systematic web of oppression at the hands of the Israeli settler colonial project.