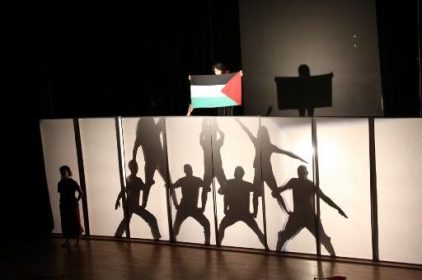 The Ramallah-based Palestinian Circus School (PCS) is taking, to Europe, its Sarab production that mirrors the plight of refugees through the use of Chinese pole, juggling, acrobatics and trapeze, to reflect on their own history and the repetition of it, today, for millions of people, a PCS press release said on Thursday.

“To reach the unreachable… an illusion; this has been the reality for millions of refugees worldwide. Escaping death and seeking a safe haven that seems so far fetched is a constant agony to children, fathers, mothers, brothers and sisters, young and old from different cultures/ backgrounds but all alike,” said the press release introducing Sarab, Arabic for illusion.

According to WAFA, Sarab is a production composed of seven performers of the Palestinian Circus School, with the help of the renowned artist and director, Paul Evans.

“The idea initially originated in 2015 as the Middle East reached an unfathomable level of terror with unseen numbers of people being displaced, while other nations and continents have suffered and witnessed the plight of displacement as generations throughout history have sought out refuge due to the consequences of unjust powers, wars and dictatorships,” said the press release.

“A Déjà vu… that is what it was. Experiences passed along over time and relived by many through cold winters and dry summers.”

The performers mirror the plight of the refugees and they work together to depict the experiences of all refugees to the world.

The Palestinian Circus School was set up in the West Bank 12 years ago to bring circus to young people. It has engaged in conducting circus training sessions with refugees abroad, such as Turkey, Germany, and Jordan in an attempt to meet the needs of refugees.

The show is funded by the Consulate General of Sweden in partnership with the Palestinian Performing Arts Network and Wales Arts International.

Sarab premiered in Ramallah on February 15 and its performers have been touring Europe since April 10. The opening night was part of the CircusFest 2018 at Jacksons Lane, United Kingdom on April 14.

It will be performing in Denmark at Eutopia Performance Art Theatre in Brabrand on May 4 and 7 and in Belgium between May 16 and 26.