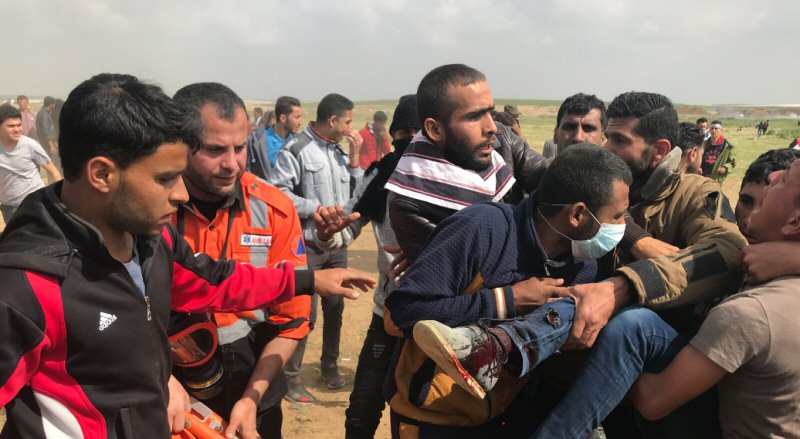 By the time he was transferred to Istishari Arab Hospital, in Ramallah, after undergoing seven surgeries in Gaza, there was nothing doctors could do to save his left leg.

It had to be amputated, unbeknown to al-Zaieem, 22, who was unconscious at the time.

“No one dared to tell him [when he woke up from the surgery]. I couldn’t,” said his cousin of the same name, who lives in the occupied West Bank.

“As he was trying to get up, he suddenly felt the imbalance in his legs. He was in shock. It’s like he was searching for his leg. It was the hardest moment for him. He was silent for five minutes while I was talking with him.”

Al-Zaieem is among the 24 Palestinians who have had their limbs amputated since the Great March of Return mass protests started on March 30.

Medics on the ground say Israeli forces are shooting at demonstrators with a new type of round – never seen before – known as the “butterfly bullet,” which explodes upon impact, pulverising tissue, arteries and bone, while causing severe internal injuries.

All 24 amputees were shot with a single explosive bullet, including journalists Yaser Murtaja and Ahmad Abu Hussein who succumbed to their wounds after being shot in the abdomen.

The bullets are the deadliest the Israeli army has ever used, according to al-Qedra.

“Normally, a regular bullet breaks the leg [upon impact]. But these bullets create massive wounds, indicating that an explosion happened inside the body. It’s an expanding bullet. It pulverises the leg, and the leg gets cut off [as a result],” al-Qedra explained.

Gaza’s medics have struggled to cope, not just with the sheer number of injured demonstrators that rush through the hospital doors every Friday, but also to properly treat these kinds of ghastly wounds.

Medical staff from Doctors Without Borders (MSF) operating in Gaza say patients who have been shot with the rounds have sustained fist-sized wounds of an “unusual severity” and will have to undergo “complex surgical operations.”

“Half of the more than 500 patients we have admitted in our clinics have injuries where the bullet has literally destroyed tissue after having pulverised the bone,” said Marie-Elisabeth Ingres, head of MSF in Palestine, in a report.

“Managing these injuries is very difficult… A lot of patients will keep functional deficiencies for the rest of their life.”

Explosive rounds were banned internationally under the 1899 Hague Convention because of the “unnecessary injury and suffering caused from large bullet wounds.”

Under international law, when the use of force is unavoidable, law enforcement officials must make all efforts to minimise injury.

“We know about the kind of wounds that this bullet creates in the body and from the remnants of the bullets, the shrapnel that they take out. We know that this is something that we’ve never seen before,” al-Qedra said, adding that the rounds have been used since the Great March of Return movement began.

The spokesperson for the Israeli army did not respond to Al Jazeera for comment by the time of publication.

Many have documented how Israel has “turned the occupied territories into a laboratory for refining, testing and showcasing its weapons systems,” which it later sells worldwide with the advertisement that the products have been “tested in combat.”

Israel is smaller than New York, yet it’s believed to be the largest per capita weapons exporter in the world.

The butterfly bullet, however, isn’t the only new weapon featured prominently in the protests in Gaza.

The yellow-green gas has caused many who were exposed to it to convulse, their legs and bodies thrashing violently as they lay on the ground.

Others suffered from asphyxia or experienced extreme migraines and rapid heart rates.

“It’s much more dangerous than tear gas, and its symptoms are more severe,” explained Dr Ashraf Jomaa, a chemistry specialist from Gaza, noting it is difficult to find an appropriate treatment.

“One of the cases is Ahmed Zo’rob, 18, who has lost his consciousness since the first Friday of the march [March 30] and has been transferred to Egypt for treatment,” Jomaa said.

“We have unexploded gas bombs as samples here, but the scientific potential in Gaza is too weak to properly detect the various advanced gases used by the Israeli occupation,” Jomaa said.

“These are internationally prohibited weapons, and we call on the Organisation for the Prohibition of Chemical Weapons and the international community to send an investigative committee.”

Seventy-five people are currently being hospitalised because of exposure to the gas.

“For regular gas, it takes just a few minutes to apply treatment,” Qedra said. “But in these cases it often takes patients seven hours in the hospital to recover.”

In another first, the Israeli army also experimented with “crowd control” methods last March by using drones to drop tear gas on protesters.

On Friday Amnesty International issued a report calling on governments worldwide to impose an arms embargo on Israel following the country’s “disproportionate response” to the demonstrations along the border fence.

“The nature of these injuries shows that Israeli soldiers are using high-velocity military weapons designed to cause maximum harm to Palestinian protesters that do not pose imminent threat to them,” said Magdalena Mughrabi, Amnesty’s deputy regional director for the Middle East and North Africa.

“These apparently deliberate attempts to kill and main are deeply disturbing, not to mention completely illegal. Some of these cases appear to amount to willful killing, a grave breach of the Geneva Conventions and a war crime.”

For Palestinians in Gaza, there are few options. The situation is dire but protesting for change comes at a huge risk.

On that fateful afternoon on April 6, al-Zaieem had seen a wounded protester, bleeding from the leg, lying on the ground about 70 metres away from the fence and fully exposed to the line of fire.

He ran over and quickly dragged the wounded young man to a safer area behind the nearest sand mound.

The Israelis shot at them several times, but they were unscathed. Al-Zaieem waited about 10 minutes for the shooting to calm down – but the Israelis were waiting as well, his cousin recounted to Al Jazeera from the West Bank.

The moment al-Zaieem stood up to run and call the paramedics, he felt the “electricity” run through his leg as an explosive bullet hit him.

“Later he said, ‘It’s okay’ and that ‘It’s God’s will; praise be to God’. But he’s just pretending,” his cousin said sadly.

“His disability is a death penalty for him. He lost his future. Deep down, he wishes he died instead. He loved football so much, but now he won’t even be able to walk without crutches. What a loss.”