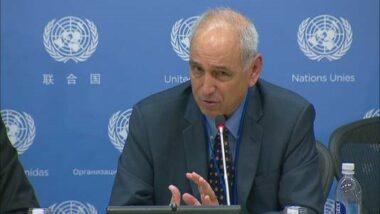 The Palestinian Center For Human Rights (PCHR): Date: 19 July 2020: On 16 July 2020, Professor Michael Lynk, the United Nations (UN) Special Rapporteur on the situation of human rights in the Palestinian territories occupied since 1967, introduced his annual report to the 44th Regular Session of the UN Human Rights Council, addressing Israel’s illegal policies and practices of collective punishment targeting the Palestinian people.

Emphasizing Israel’s failure to uphold its legal obligations under international law, the Special Rapporteur considered Israel’s reliance on collective punishment as a “prominent instrument in its coercive toolbox of population control.”

Professor Lynk further called on Israel, the Occupying Power, to “end all measures amounting to collective punishment, including an end to the closure of Gaza, all restrictions on freedom of movement across the Occupied Palestinian Territory, the punitive demolitions of homes, the punitive residency revocations, the cutting of benefits, the punitive closures of towns and all delays in returning bodies for burial.”

Our organisations welcome the Special Rapporteur’s recent report to the Human Rights Council, as it examines one of Israel’s well-worn policies of imposing unlawful collective punishment measures as a tool of repression, control, and domination over the Palestinian people to maintain its settler-colonial and apartheid regime.

The report shows how Israel continues to legitimize the illegitimate, with unlawful collective punishment measures, such as punitive house demolitions and the withholding of Palestinians’ bodies having been greenlighted by Israeli courts.

Accordingly, the Special Rapporteur presented a list of recommendations to the Human Rights Council, calling on Israel, the Occupying Power, to end its 53-year-old occupation of the West Bank, including East Jerusalem, and the Gaza Strip, in compliance with international law.

He further urged the international community to “take all measures, including countermeasures and sanctions, necessary to ensure the respect by Israel of its duty under international law to end the occupation.”

The international community has repeatedly condemned Israel’s illegal policy of collective punishment against Palestinians. Yet, the international response has rarely risen above the level of verbal condemnation.

The Special Rapporteur, former UN Secretary Generals, UN High Commissioner for Human Rights, Michelle Bachelet, UN treaty bodies, and the International Committee of the Red Cross (ICRC) have all called on Israel, as Occupying Power, to put an end to all measures amounting to unlawful collective punishment.

During the Universal Periodic Review (UPR) of Israel in 2018, several UN Member States, including Germany, Namibia, and Malaysia, called on Israel, the Occupying Power, to put an end to illegal collective punishment.

As Palestinians continue to endure widespread and systematic human rights violations committed with total impunity, our organisations urge international justice and accountability for suspected crimes committed against the Palestinian people, including at the International Criminal Court.

Our organisations further call on Third States to adopt effective measures to put an end to Israel’s illegal and inhumane policies of collective punishment, including sanctions and countermeasures, to bring the illegal situation to an end.