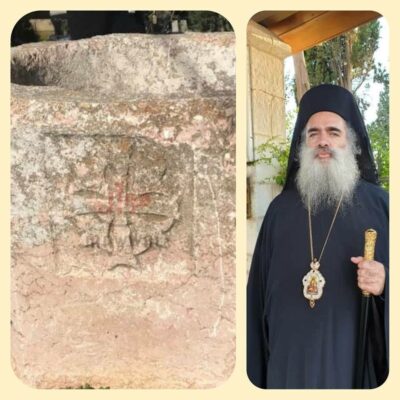 The Palestinian Greek Orthodox Archbishop of Jerusalem and the Holy Land, Theodisius Atallah Hanna, issued a statement Tuesday condemning the Israeli military’s theft of a Christian holy object, a fifth century baptismal font from the Church of Nativity.

The Archbishop stated, “The theft of the historical baptismal font yesterday is considered a direct targeting of our history, our heritage, and the legacy of our existence in this Holy Land.”

His Excellency Archbishop Atallah Hanna, Archbishop of Sebastia of the Greek Orthodox, said that the Israeli theft of the ancient and archaeological baptismal font that dates back to the Byzantine era is considered a criminal act that is a direct violation of the ancient Christian heritage in the Holy Land.

The baptismal font was stolen from the village of Teqoua in the Bethlehem governorate. The Archbishop said this is a heinous crime whose aim is to obliterate the cultural, historical and heritage monuments of the continuous Palestinian Christian existence in this Holy Land for thousands of years.

He said, “This is a direct targeting of our Christian heritage associated with this Holy Land, and it is not the first time that historical Christian monuments have been obliterated in our country, especially in the city of Jerusalem. When Israeli roads were erected in multiple places, Christian relics and mosaic paintings linked to the ancient and pure Christian presence in this land were discovered. Many of these holy objects and artifacts which were uncovered by Israeli excavations have been looted, stolen and placed in Israeli museums.

“In every corner and in every village and city in our holy country, there are Christian relics that must be preserved as part of our history and the identity of our country. In the city of Jerusalem, there are constant Israeli attempts to obliterate Christian and Islamic monuments in a miserable attempt to undermine the character of our city and the identity of our Jerusalem.

“This plunder of our civilization, history, and heritage should make us more united in the face of these hostile acts of aggression. Our struggle is the same, and we should not allow anyone to stir up discord, fragmentation, and division in our homeland, as we must be, as we have always been, united in facing the Israeli policies meant to undermine our culture and deny our heritage.

“We demand that this baptismal font be returned to its rightful place, and that it be placed in a Palestinian church or museum. We also categorically reject the Israeli theft of antiquities, whether Christian or Islamic, especially in the city of Jerusalem.

“During the past years, in various places in Jerusalem, when excavations were being conducted in order to open tunnels or new streets, relics of ancient churches and Christian monuments dating back to the fifth century AD were uncovered.

“It is our duty as the Palestinian people to reject any insult to our heritage, history, and holy places, and to be united in one heart, so that we may stop the Israeli plunder of our monuments and religious monuments. The aim of the Israeli government is to marginalize our presence and undermine our history and the evidence of the continuity of our existence in this Holy Land.”