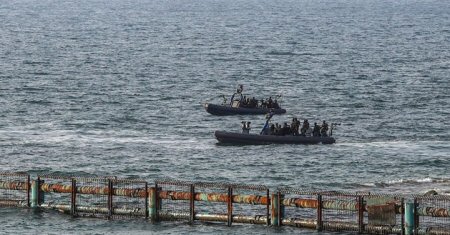 He confirmed that the fishermen were sailing only three nautical miles offshore the area when Israeli naval boats opened gunfire and water hoses towards them.

The fishermen had to leave the water and abruptly end their fishing mission, which is their sole source of livelihood. No injuries were reported though.

Meanwhile, Israeli forces manning the border fence fired live rounds and tear gas at a group of farmers who were tending to their groves to the east of the al-Zaytoun neighborhood, southeast of Gaza city.

The farmers were forced to leave their groves and no injuries were reported among them.

Fourteen years following the Israeli “disengagement” from Gaza, Israel has not actually disengaged from Gaza; it still maintains control of its land borders, access to the sea and airspace.

Two million Palestinians live the Gaza Strip, which has been subjected to a punishing and crippling Israeli blockade for 12 years and repeated onslaughts that have heavily damaged much of the enclave’s infrastructure.

Gaza’s 2-million population remains under “remote control” occupation and a strict siege, which has destroyed the local economy, strangled Palestinian livelihoods, plunged them into unprecedented rates of unemployment and poverty, and cut off from the rest of the occupied Palestinian territories and the wider world.

Gaza remains occupied territory, having no control over its borders, territorial waters or airspace. Meanwhile, Israel upholds very few of its responsibilities as the occupying power, failing to provide for the basic needs of Palestinian civilians living in the territory.