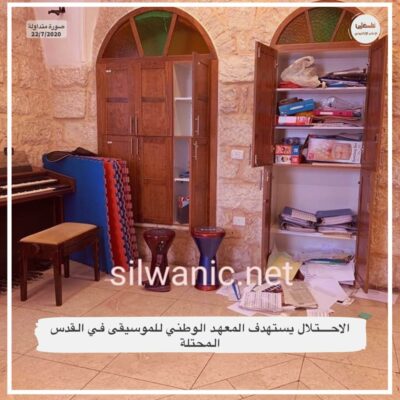 They said Israeli police and intelligence officers stormed the East Jerusalem residence of Rania Elias, director of Yabous Cultural Center, and Suheil Khoury, director of Edward Said National Conservatory of Music (ESNCM), and escorted them to the center and the conservatory located in the heart of East Jerusalem’s business district, searched them thoroughly, ransacked them and seized records and other documents.

Elias and Khoury were also detained by police.

The Palestinian Ministry of Culture strongly condemned the Israeli police raid against the cultural centers in Jerusalem and the detention of two of their directors.

“The attack on these institutions is an attack on the Palestinian national culture and cultural heritage,” said the Ministry in a statement.

Israeli police have recently intensified their campaign against all Palestinian institutions and activists in the occupied city, closing most them of them and detaining leaders in an effort to prevent any Palestinian activity in the city.

“First and foremost, ESNCM works in Education. Over a thousand students currently study music on the Academic Programs in the ESNCM’s six branches in Jerusalem, Nablus, Gaza, Ramallah, Bethlehem and the Tchaikovsky Music School.  Both Arabic and Western music are taught, and the students receive individual instrumental lessons, theoretical classes and ensemble tuition as well as choir, Arabic percussion and music history,” according to the conservatory’s website.

“Yabous is a non-governmental Palestinian organization based in Jerusalem. Yabous was established in 1995 when a number of artists and culture enthusiasts and entrepreneurs from Jerusalem decided to create a body to adopt the development and patronage of performing arts in Jerusalem,” said the Yabous website.