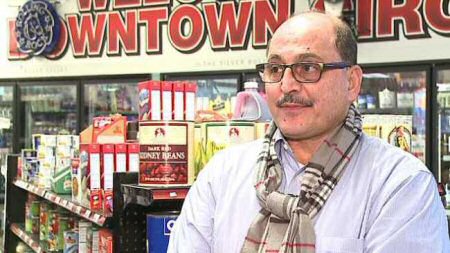 Amer Adi, a Palestinian American small business owner and a community leader in Youngstown, Ohio, has been targeted relentlessly for decades by US immigration agencies on the basis of false allegations of a “sham marriage.”

After a decade of legal and political struggle, he was forced to a “voluntary” deportation to Amman, Jordan, despite his 30-year marriage to a U.S. citizen and four U.S. citizen daughters. However, due to community pressure and the involvement of Adi’s member of Congress – Rep. Tim Ryan of Ohio – he was granted a last-minute stay of deportation, allowing Amer to stay in the country. January 6 was declared “Amer Othman Adi Day” in Youngstown and the Palestinian community and supporters of justice packed the Arab American Community Center for a celebration on that day.

On 16 January, Amer Adi was suddenly seized and detained by ICE (Immigration and Customs Enforcement) when he reported for a scheduled meeting at the immigration office in Cleveland. He is currently being held in detention and has launched a hunger strike to demand his freedom.

“Adi is originally from Beit Safafa, a town in occupied East Jerusalem. In 1948, his family fled the Zionist militias of a fledgling Israeli state, becoming refugees during the Nakba. In 1979 at the age of nineteen, Adi left Jordan for the United States on a visa,” Mondoweiss noted.

Amer is a long time Palestinian activist and organizer with USPCN who has been battling the US broken immigration system for decades, he was granted a deportation stay 2 weeks ago and was ripped away from his loved ones and detained this morning by ICE while attending a scheduled meeting.