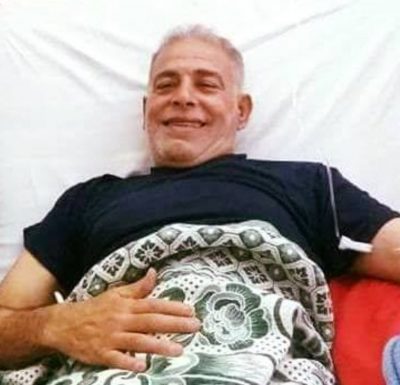 A Palestinian man, a cancer patient identified as Masoud Abdul Hai Abu Saqer, aged 49, died on Tuesday, at Erez/Beit Hanoun crossing between Gaza and Israel, while awaiting to be interviewed by Israeli security officers, to discuss his permit application to receive treatment at an East Jerusalem hospital, the Al-Mezan Center for Human Rights said, on Wednesday.

Al-Mezan said the patient had all needed referrals and documents to continue cancer treatment at Augusta Victoria Hospital, in occupied East Jerusalem.

Investigations by Al-Mezan revealed that the man previously submitted three applications to be allowed to leave the Gaza Strip for treatment in Al-Makassed Hospital in Jerusalem since he was officially diagnosed in December of 2017, but his applications were all denied.

His son, Saed Abu Saqer, 26, said his father was first interviewed by Israeli Intelligence officers at Erez Terminal on January 23rd, 2018, but instead of discussing his application to receive treatment, and examining his medical reports, the security officers were asking him about “activities of the resistance in Gaza,” and were trying to recruit him as an “informant,” in exchange for allowing him to receive treatment.

After his application was denied, he managed to leave Gaza through Rafah Border Crossing with Egypt, and was admitted to Nasser Hospital, where the surgeons removed his cancer-ridden right kidney.

After returning to Gaza, cancer cells spread to his abdomen and intestines, before he was referred to Augusta Victoria hospital in Jerusalem, but Israel denied his applications three times.

Seven Gaza patients, including three women, have reportedly died, since the start of this year, after their applications for an Israeli permit to leave the besieged Gaza Strip were either denied or delayed.