Palestinian Dies from Serious Wounds He Suffered On May 14th 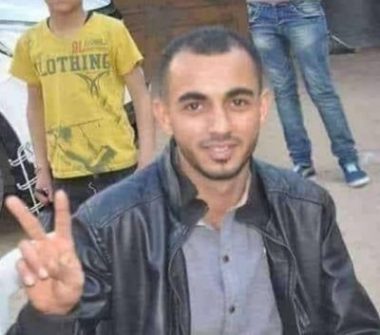 The Palestinian Health Ministry has confirmed, Tuesday, that a young man died from serious wounds he suffered, on May 14th, after Israeli soldiers shot him with live fire in northern Gaza.

The Health Ministry said the Palestinian, Majd Soheil Mohammad ‘Oqeil, 26, was shot during the “Great Return March” nonviolent protests, on May 14th, and remained in a critical condition until he succumbed to his wounds.

The Palestinian is from Jabalia refugee camp, in Jabalia, in northern Gaza.

Israeli soldiers have killed 142 unarmed protesters, and wounded 17,000 who were participating in non-violent protests, since the Great Return March procession started on Palestinian Land Day, on March 30th.

In a report, Defense For Children International (DCI) has reported that Israeli soldiers have killed 25 Palestinian children, 21 of them in the Gaza Strip, since the beginning of this year.

On July 22, a young Palestinian man, identified as Karam Ibrahim Arafat, 26, died from serious wounds he suffered on June 8th, when Israeli soldiers shot him with live fire east of Khan Younis, in the southern part of the Gaza Strip.

On the same day, during pre-dawn hours, the soldiers invaded Deheishe refugee camp, south of Bethlehem, and killed a child, identified as Akram Tha’er Mizhir, 15.