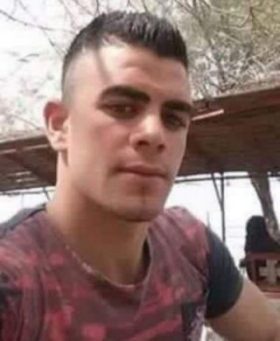 The Palestinian Health Ministry has reported, Monday, that a young Palestinian man died of serious wounds he suffered, on Friday at dawn June 3rd, after Israeli soldiers shot him during an invasion of the northern West Bank city of Nablus.

The ministry said the young man, Jamal Mohammad Dweikat, 20, was shot with a live round in the head, and remained in a very serious condition.

Dweikat, and another wounded Palestinian, were moved to a hospital in Nablus, before he was transferred to an Israeli hospital, where he died of his wounds.

Also on Monday, the Palestinian Prisoners Society PPS, has reported that Israeli soldiers kidnapped two Palestinians in Ramallah, and one in Qalqilia.

On Monday at dawn, the soldiers invaded several Palestinian communities in the southern West Bank district of Hebron, searched many homes and kidnapped four Palestinians.

Furthermore, the army kidnapped a teenager and a child, in the West Bank district of Bethlehem, and in occupied East Jerusalem.