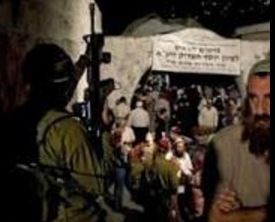 Israeli soldiers invaded, on Friday at dawn, the northern West Bank city of Nablus, and clashed with many local youths, wounding two Palestinians with live fire, while one of them suffered a life-threatening head injury. One Palestinian was kidnapped In Qalqilia.

Media sources in Nablus said dozens of soldiers, and settlers invaded the city, and headed towards ‘Joseph Tomb,’ east of Nablus,

The invasion led to clashes between the soldiers, who fired many live rounds and rubber-coated steel bullets, and local youngsters, who hurled stones and empty bottles on the invading vehicles.

Medical sources said Jamal Mohammad Dweikat, 20, from Balata, was shot with a live round in the head, leading to a very serious injury, while another young man suffered a moderate injury after the soldiers shot him in the leg.

Both Palestinians were rushed to a hospital in Nablus, while the soldiers also invaded several neighborhoods.

Under the 1993 Oslo Accords, the site was to remain under Israeli control. However, the Israeli army evacuated the premises in October 2000 shortly after the start of the Second Intifada.

Following security cooperation with the Palestinian Authority, the Israeli army allows Jewish worshipers to make monthly nocturnal pilgrimages to the site; the Palestinians are not allowed access.

Palestinians believe that Joseph’s Tomb is the funerary monument to Sheikh Yousef Dweikat, a local religious figure. Others believe that the tomb belongs to the Biblical patriarch Joseph.

In related news, the soldiers invaded Azzoun town, east of the northern West Bank city of Qalqilia, and kidnapped one Palestinian.