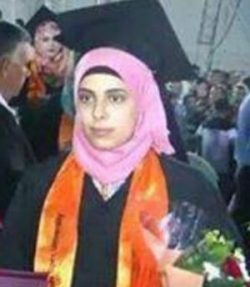 Update: The Palestinian  Health Ministry said the slain woman has been identified as Ansar Husam Harsha, 25, from  Qaffin town, northeast of the northern West Bank city of Tulkarem.

She is a married mother of two children; Hadeel, two years of age, and Yamen , 4.

Jun 2, 2016 @ 04:04 PM – Israeli soldiers killed, on Thursday afternoon, a Palestinian woman, at the Ennab military roadblock, east of Tulkarem city, in the northern part of the occupied West Bank.

The Israeli military claimed that the slain woman “attempted to stab a soldier,” before she was shot and seriously wounded.

An eyewitness told the al-Fajr Palestinian TV that an army officer opened fire on the woman while she was more than three meters (approximately 10 feet) away from the soldiers. The Israeli army said there were no injuries among its soldiers. 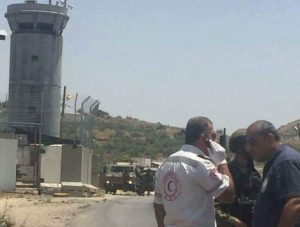 The Palestinian Health Ministry said Red Crescent medics rushed to the scene, but the soldiers prevented them from even approaching her, to provide her with the urgently needed medical attention, and she died of her wounds.

The soldiers closed the roadblock for a few hours after the incident, preventing the Palestinians from crossing.

It is worth mentioning that the Israeli army have killed 205 Palestinians, including many children and women, since the October 1st 2015, and wounded thousands of residents. 28 Israelis were killed, and dozens were injured.

The tension reached an explosive point due to increased Israeli invasions, and provocative tours into the courtyards of the Al-Aqsa Mosque in occupied Jerusalem, and invasions into the mosque itself, in addition to the Israeli decision to divide the mosque temporally and spatially.